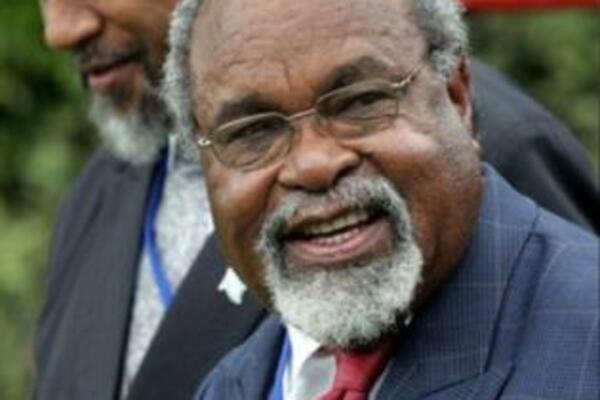 "Papua New Guinea is proud to be associated with such a successful regional initiative," said Mr Somare."My country will be part of RAMSI for as long as the Mission is needed."
Source: abc.net.au
Share
Monday, 07 September 2009 09:43 AM

Speaking in talks this week with RAMSI Special Coordinator, Graeme Wilson, Sir Michael said that Papua New Guinea would continue its substantial contribution to the Mission which was deployed to Solomon Islands in 2003.

"Papua New Guinea is proud to be associated with such a successful regional initiative," he said."My country will be part of RAMSI for as long as the Mission is needed."

Mr Wilson, who welcomed PNG's ongoing commitment to RAMSI, said his four-day visit to Papua New Guinea had given him the opportunity to thank Papua New Guinea for its outstanding contribution to RAMSI, particularly the excellent work of its military and police contingents.

"Papua New Guinea has been one of the leading Pacific Island contributors to RAMSI since its inception and has made a sustained and highly valued contribution to the Mission," Mr Wilson said.

"The recent decision by Pacific Islands Forum leaders in Cairns to invite Papua New Guinea to be a permanent member of the Forum Ministerial Standing Committee on RAMSI was recognition of this contribution as well as the constructive role PNG has played over the years in support of the Mission and the Solomon Islands Government," he added.

"RAMSI's regional nature is its underlying strength and PNG is a key player in the region. We look forward to working closely with PNG, and the other members of the Forum Ministerial Standing Committee, in taking forward the Partnership Framework which was recently finalised by the Solomon Islands Government and RAMSI, and endorsed by Forum leaders".

Mr Wilson was also able to use the occasion of the Pacific Chiefs of Police meeting, which was being hosted by PNG, to thank regional Police Commissioners or their representatives from RAMSI participating countries for their ongoing support for the Mission.

Mr Wilson said RAMSI had been pleased to host a number of high level visits from PNG in recent times, including by Defence Minister, Bob Dadae in May.
"I hope it might be possible to welcome back Prime Minister Somare to RAMSI headquarters in the not too distant future," Mr Wilson added.