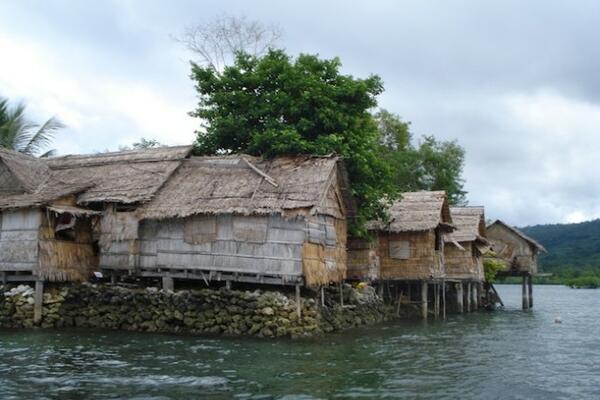 The melting of glaciers and ice sheets also contributes to sea-level rise, which is already causing problems for such artificial islands.
Source: ipsnews.net
Share
Friday, 05 July 2013 08:53 AM

Solomon Islands like many other countries in the Pacific is at risk to coastal erosion, storm surges and water inundation with sea levels projected to rise in the coming century.

As ocean water warms it expands causing the sea level to rise. The melting of glaciers and ice sheets also contributes to sea-level rise. Instruments mounted on satellites and tide gauges are used to measure sea level.

Studies undertaken under the Australian funded project, the Pacific Islands Climate Change Science Program indicated that sea level has risen near the Solomon Islands by about 8 mm per year since 1993.

This higher rate of rise may be partly related to natural fluctuations that take place year to year or decade to decade caused by phenomena such as the El Niño-Southern Oscillation.

Salesa Nihmei of Pacific Meteorological Desk Partnership at SPREP said that projections suggest that sea level in the Pacific region is likely to be similar to the global average however, he warned that higher values are possible with the increased understanding of ice sheet dynamics to improve sea level projections.

This rise in sea level was related to global warming due to the increasing rates of carbon dioxide emissions into the atmosphere.

Nihmei further highlighted that carbon dioxide concentrations are now higher than they were hundreds of thousands of years ago.

He said research over the past century clearly shows that higher green house gas concentrations warm up the planet as exactly observed globally and over the pacific.

Adding that research over the past 50 years shows all Pacific Island stations have warmed, most in the range 0.4°-1.0°C.