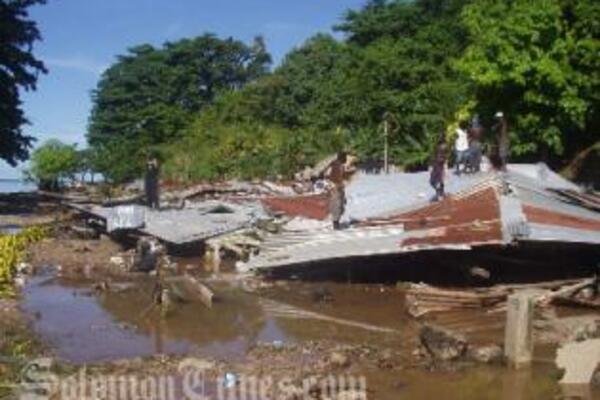 "Human lives and valuable properties will be saved in an event of any future tsunami that possibly will strike Solomon Islands once the Australian Tsunami Warning System (ATWS) is put in place around the country," says Hon. Gordon Darcy Lilo, Minister of Environment, Conservation and Meteorology.

Mr Lilo made the statement when signing together with Australian High Commissioner to Solomon Islands, His Excellency Mr Frank Ingruber, a Memorandum of Understanding (MoU) on the Australian Tsunami Warning System and the South Pacific Sea Level and Climate Monitoring Project (SPSLCMP) in Honiara today.

In April 2, 2007, an early morning magnitude 8.1 undersea earthquake triggered a tsunami that has killed at least fifty two people including children and leaving thousands homeless in the country's Western Region.

Coastal villagers were trapped without any warning to save lives of helpless family members including children as well as valuable properties during that early morning natural disaster.

Mr Lilo said the signing today is an occasion that Solomon Islands have been waiting for to pave the way for the establishment of the warning system following numerous official discussions between the two governments.

He said the tragic event in April 2007 that caused millions of dollars worth of damage and many lives lost is a reminder to Solomon Islanders of what natural disasters can do to our people.

"This MoU will pave the way for the establishment of tsunami warning systems and climate monitoring networks which will not only benefit both countries but the region as well. We hope that these establishments will greatly enhance our early warning systems," Mr Lilo said.

In response, Mr Ingruber said the MoU will strengthen Solomon Islands' preparedness to address tsunamis and enable greater advance warning to communities, should an event like the April 2007 tsunami occur again.

The SPSLCMP began in 1991 in response to concerns expressed by Pacific Island Countries about human-induced global warming and sea level rise. The project collects and analyzes sea level and surface temperature data from a network of sensors in 12 Pacific Island Countries including Solomon Islands, as well as from an associated network of continuous global positioning sensors. Australia will contribute $32 million to the project by 2010 and a further $4.3 million over the next 3 years to refurbish and upgrade the sea level and global positioning networks.

Solomon Islands is the eight country to sign a MoU with Australia on the installation of tsunami warning equipment, the others being Papua New Guinea, Niue, Cook Islands, Vanuatu, Samoa, Tonga and the Federated State of Micronesia have also signed the MoU. Discussions are continuing with six other countries.

Data collected from tsunami warning equipment will make a significant contribution to improving tsunami warnings throughout the Pacific region. The data will be shared with the Pacific Tsunami Warning Center in Hawaii which provides tsunami advisories for the South West Pacific.

The Australian Government looks forward to working with Solomon Islands to strengthen tsunami warning in the region.