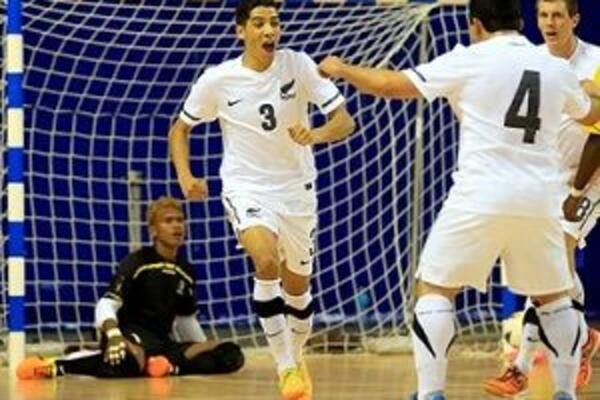 The OFC Futsal Championship Invitational 2013 got underway at The Trusts Arena in Auckland, New Zealand today with four goal-filled matches, including a 7-3 loss to New Zealand for defending champions Solomon Islands.

In the final match of the evening reigning Oceania champions Solomon Islands faced a New Zealand smarting from their three-match Trans Tasman Cup loss to Australia over the weekend. The Futsal Whites came out faster and more accurate on the ball than the Kurukuru, whose last international was a win over Guatemala in their final group match at the FIFA Futsal World Cup in 2012.

Dylan Manickum was a standout for the Kiwis as he earned a hat-trick in the first half to give his side a commanding 3-0 lead coming into the second period when he once again found the back of the net three minutes into play and again two minutes later.

The night only got worse for the Kurukuru when Jack Wetney was given his marching orders for a second bookable offence. New Zealand were quick to capitalise as James Vaughan slotted in the side’s sixth goal and they soon had their seventh.

Solomon Islands finally got into the game in the last minute of the match scoring three consecutive goals but it wasn’t enough to catch the Futsal Whites, who had created a comfortable lead for themselves, with the final score 7-3 in the Kiwis favour.

Solomon Islands coach Dickson Kadau says his side’s late arrival hampered their ability to prepare and get used to the court ahead of the match however conceded New Zealand came out looking to win.

“The big difference was that they always pressed us and played a very good game tactically, they used their target very well,” Kadau says. “The next match against New Caledonia will be tough but we now have to make sure we win that game.”

New Zealand coach Scott Gilligan was incredibly pleased his side could notch up a win after a tough string of international losses.

“We’re superbly happy, what can I say? It was a great game from us, we were 7-0 up and I think we lost our heads a bit at the end there but it was a fantastic performance,” Gilligan says. “I think that it helped that we had played a few games against Australia leading up to the tournament because Australia are much faster than most of the teams in Oceania.”

The OFC Futsal Championship Invitational 2013 continues tomorrow at The Trusts Arena in Auckland with another four action-packed matches on the schedule. Solomon Islands and New Caledonia are first on the card at 2pm followed by Tahiti and the NZ Invitational side at 4pm. Australia will then face Vanuatu at 6pm before Malaysia take on New Zealand at 8pm.