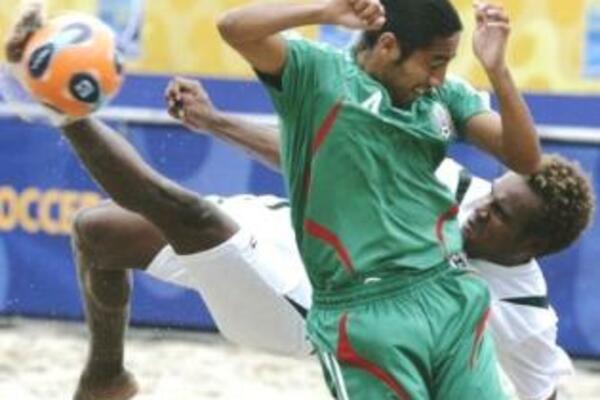 Expected to once again lead the charge for the Solomon Islands is James Naka, who has scored a remarkable 17 goals in four FIFA Beach Soccer World Cup campaigns.
Source: fifa.com
Share
Tuesday, 22 February 2011 11:45 AM

The tournament, which is being held at Jardin de Paofai in Papeete, was originally scheduled to begin on 22 February, but the opening date has been pushed back a day following delays in transit for Vanuatu as wild weather lashed the Pacific over the weekend. After facing each opponent once, the two finalists will meet on 26 February with a ticket to the world stage the prize on offer for the victor. The tournament will allow local fans just a small taste of what awaits in two years time, when Tahiti will become the first Pacific Island nation to stage a FIFA tournament as host of the Beach Soccer World Cup in 2013.

The pedigree of Solomon Islands on the sand is unquestioned, with the Bilikiki having claimed all three Oceania tournaments held since the inaugural crown was contested in 2006. The Solomons have even made an impression on the world stage, most famously defeating Uruguay at the 2009 edition of the tournament in what was a landmark result for Pacific Island nations at a FIFA tournament.

The Solomons are the only team to represent Oceania at a FIFA Beach Soccer World Cup and undoubtedly have the experience and expertise to start as strong favourites. Ominously for their rivals, Bilikiki coach Henry Koto believes the current crop are the best he has fielded since taking the reins of the national team in 2008. "The players in this team are highly talented as individuals and this will make our combinations effective," said Koto. "I also believe that this team has the determination to win and the players have the fighting spirit within them."

Host nation Tahiti may have little in the way of star quality in their squad but they do possess a goalscorer with enormous pedigree at this level. Teva Zaveroni has bagged 17 goals in previous Oceania tournaments to sit second behind Naka on the continent's all-time list of goalscorers. Despite the home advantage, the Tahitians will have a tough job overcoming not only the Solomons, but also perennial challengers Vanuatu.

Runners-up three times, Vanuatu only narrowly lost the last Oceania final and, after defeating the Solomon Islands in the group stage on that occasion, they will harbour genuine ambitions of going one better in the Tahitian capital this time around. While matching the attacking firepower of the Solomons is a challenge in itself, Vanuatu can at least boast the goaltending capabilities of Chikau Mansale, with the 27-year-old named best keeper at the tournament's three previous editions. Vanuatu also possess the talents of two renowned international players in the traditional form of the game: Etienne Mermer and player/coach Richard Iwai.

Fiji meanwhile have named a relatively inexperienced squad, with just three players, Sandeep Nair, Shalendra Buisena and Benaminio Mateinaqara, having played in the country's only other appearance at the Oceania qualifiers in 2009. However, like Vanuatu, Fiji too have star power, with giant striker Ratu Veresa Toma an icon of the Fijian game for his international exploits on grass.