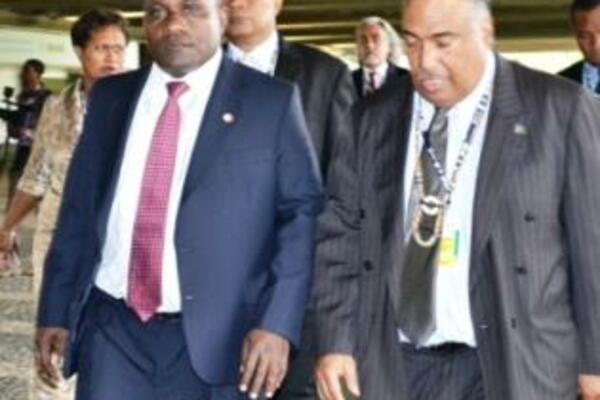 Solomon Islands Prime Minister Gordon Darcy Lilo has commended the decision by countries meeting in Rio de Janeiro to give the Pacific hosting rights for a key meeting on sustainable development in 2014.

In his country address to world leaders at the Rio+20 Conference in Brazil, Mr Lilo, said the Pacific's hosting of the Third Sustainable Development Conference for Small Islands Development States (SIDS) will highlight the special situation of SIDS.

The Pacific's hosting of the SIDS meeting was one of the outcomes of negotiations at Rio+20.

"Solomon Islands welcomes the recognition by all leaders that climate change is undermining sustainable development."

He Lilo said vulnerable countries in particular Small Islands Developing States and Least Developed countries, both of which Solomon Islands is a member of, have an uncertain future given the intensity and frequency of various natural and global crisis.

Solomon Islands prime minister also gave his country's support for a SIDS initiative to convene a ministerial meeting on the sidelines of the United Nation's 67th General Assembly.

Mr Lilo said the event would build on the current political momentum at Rio and garner support for the UNFCCC's campaign of keep global temperatures from rising over 1.5 degree Celsius.

"Small Islands Developing States must not be seen as expendable because of their smallness, nor be regarded as collateral damage because of global inaction."

As for the Rio+20 itself, Mr Lilo said the Solomon Islands recognized some of the key deliverables.

"We will be launching three process decisions; first, the establishment of the Sustainable Development Goals. These goals will safe guard, life-giving resources needed for humanity's survival.

"Second, an institutional framework for sustainable development, to better coordinate the implementation of decisions emanating from the conference.

"Third, the means of implementation that should translate decisions into action with relevant technology transfer, and a financial mechanism to ensure resources are available for implementation."

He said the conference gives countries the opportunity to renew our collective commitment to the Rio principles with a focused and concise set of agreed actions that should guarantee the future of the planet, for the present and future generations....