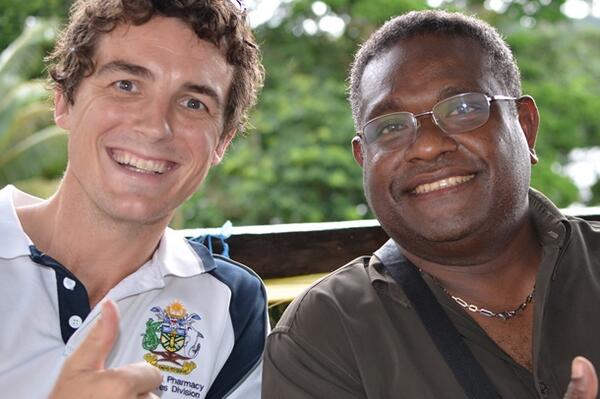 Since 2007, through the Australian aid program, Mike has worked with the National Medical Stores and Pharmacy Division to improve the supply of drugs and medical equipment to 310 health facilities across the country.

Mike is leaving behind an impressive legacy.

The availability of essential medicines at National Medical Stores has increased from 47 per cent to 93 per cent since 2007 - double and in some cases three times the global average for WHO regions. A therapeutic drug committee has been established, an essential medicine list has been developed as well as procurement, distribution and treatment guidelines. The National Medical Stores now handles more than 1500 orders and distributes more than SBD30million dollars of medicine annually.

“When I arrived in 2007, there was low availability of essential medicines and it was hard to get medicine out to the provinces”, Mike explains.

“I had some ideas of what a pharmacy system should look like because I had worked in Vanuatu for a short period of time. So I spent the first few months trying to build up a history of what was going on, how the system worked, and what was missing.”

“I then travelled relentlessly around the country, back and forth to every province, going to facilities and assessing them and trying to start building infrastructure and improving their practice.”

“We wrote standards for the facilities – what services they were supposed to provide, how they were to be staffed and what infrastructure was needed. When that was finished, we started going to provinces one-by-one to get the infrastructure and ordering systems up to standard”.

“I was particularly proud when we built the medical store at Susubona in Isabel province, about 13 hours by boat from Honiara. We went there and sat down with the local community on how it should be, instead of trying to run the project from Honiara.”

“By the end of 2009, the provincial set up was taking shape and facilities were being built. The National Referral Hospital was efficiently and effectively dispensing scripts.”

Mike and his team also made other small and practical interventions in his first couple of years.

“One of the most effective, but simple things we did was buying a door closer for the ward supply room at the National Referral Hospital. We were having trouble keeping cold air in to protect the medicine. Spending SBD100 on that door closer did more to improve conditions of drugs than anything else.”

Mike’s wife Erin Nunan, also a pharmacist, made some key changes in her volunteer role with the Pharmacy Division.

“Erin developed the essential medicine list and restructured the pharmacy officers’ certificate and intern course. We had students going to study in PNG and Fiji and not coming back to Solomons. Now our Director, the Training Pharmacist, head of department and the National Referral Hospital, the pharmacists at Kilufi and Gizo have all graduated from the course. We are training around 15 pharmacy officers a year.”

Mike also led a whole range of changes over the next few years.

“We rolled out new drugs like coarten malaria treatment and zinc sulphate – the number one intervention for the number 2 killer of children in Solomons- diarrhoea. We also rolled out amoxicillin to clinics which is the first line treatment for pneumonia – no 1 killer of kids here.”

By 2011 local staff had taken over control of tendering, procurement and contract management with staff such as the Pharmacy Director, Timmy Manea, taking personal responsibility – and pride – in the outcomes which continue to improve each year.

“We had a meeting with our local counterparts and said we are putting you in the driver’s seat. You decide how you think procurement should be done. Together we wrote tender and procurement guidelines. They had the process in the head. It was a matter of taking it out and putting on paper,”
says Mike.

In 2011, Mike also helped to roll out a world-first mobile inventory system for Solomons using iPads. The system reports stock usage back to headquarters in real-time and allows the Pharmacy Division to monitor the performance of individual clinics. The user-friendly software replaces clunky hard-copy order forms and improves communication.

“The system also helps to direct our training by highlighting clinics that are not ordering properly. Rather than doing an expensive workshop where we bring every nurse to Honiara for stock management training when 75 per cent are doing a good job, we can just bring in the other 25 per cent, or better yet, go directly to those clinics.”

“If you have someone young, within 90 mins they are trained in the system, it is so intuitive. Teaching formulas and how to do paper orderings can take up day and days of training.”

“So much of the systems, literature and training in pharmacy are archaic. We need to be leap frogging to new technologies,” Mike argues.

Mike says he had to learn to become resilient very quickly.

“It really gets to you, people dying from preventable illnesses and disease. But you have to maintain your focus on long term change and building up the system, rather than getting caught up in individual cases.”

Mike says it has been the work of the talented managers and local pharmacists in Honiara and in the provinces that have led these impressive changes.

“The National Medical Stores have had a core of dedicated and hardworking staff that have been there before the tensions and are still here.”

“Mike has taken up his responsibilities with personal affection, in everything such as planning, participation, day to day activities and Solomon Islands public life”.

As with all adviser – counterpart relationships, Mike has also learnt from his team.

“Willie, Timmy and I are the three musketeers. If we all can’t go to a meeting, its fine because we know we will also be representing the same view. It takes long time to build that same understanding, that close relationship with someone.”

“I feel that I am very good friends with the people I work with. It makes it harder to leave, and it is probably why I have been here so long……..”

Mike will be applying his experience to a PhD at the University of Melbourne next year. His thesis will cover improving access to priority medicines for mothers and children through the implementation of mobile electronic inventory – mSupply on iPads.

Australian Aid has been a feature at National Medical Stores for a decade now providing technical complemented by funding for drugs, dressing, logistics, training and provincial infrastructure.