Solomons and PNG "Acclimatise" Ahead of Games 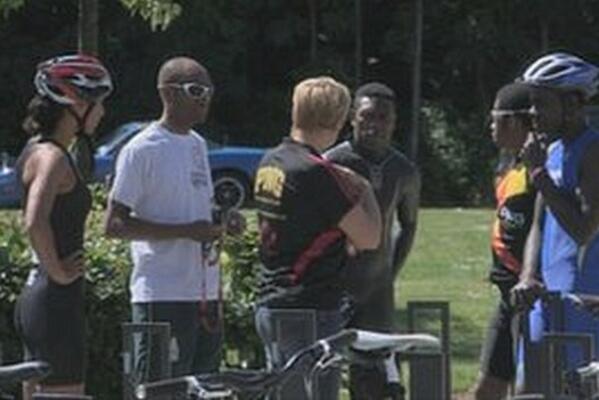 Triathletes from Papua New Guinea and the Solomon Islands have been training with Stirling Triathlon club.
Source: bbc.com
Share
Friday, 18 July 2014 07:53 AM

This week will see most of the competing nations for the Commonwealth Games arrive at the Athletes' Village in Glasgow.

But some of those overseas teams have been making use of training facilities at local sports clubs around Scotland.

Weightlifter David Gorosi is lifting 70kg in a clean-and-press. He's in the gym at The Peak, Active Stirling's local leisure facilities. He is part of an advance party of athletes from the Solomon Islands and Papua New Guinea who are attempting to acclimatise to Scotland.

"I'll have a shot at the bronze medal because I've been training for quite some time for this competition," he says.

This is David's third attempt to make his small nation's Commonwealth Games team. He is the best medal chance for the Solomon Islands, who have won only a handful of medals in their years of competing.

This year, the Solomon Islands are bringing a total team of 15 athletes to Glasgow. Three will compete in track and field, they have a Judo team and, for the first time, they have two triathletes and one table tennis player.

Team manager Martin Rara says that the Commonwealth Games is a huge event for the Oceanic Islands.

The Solomon Islands team have been training alongside an advance group from Papua New Guinea. They will have a 92-strong squad.

They are hoping for at least two gold medals in weightlifting. According to the team attaché, Brian Minichin, it is the most organised sport in Oceania after the establishment of the Oceania Weightlifting Institute in New Caledonia.

"As a group, they expect to be amongst the medals in at least seven or eight categories, so it's pretty impressive when you think it's just one programme," he says.

Papua New Guinea are also fielding a triathlon team for the first time.

The triathletes from both Papua New Guinea and the Solomon Islands have been training with Stirling Triathlon club.

Rachel James, 30, will be competing in the women's race. She says the facilities in Scotland have been amazing, but she has found the climate hard to adjust to.

"Coming from tropical countries, we're not used to the water conditions here - and the temperatures," she says.

Their coach, Sue Fergus, says that training back home in Papua New Guinea is a challenge. There is only one 25m public leisure pool in Port Moresby and, for cycling and running, there are security issues.

But the aim here is not to medal. It is not to be lapped.

"All we really want is that all five athletes can be the best they can be on the day," she says. "We hope they get beyond the lapping rule on the cycle so that they will be able to get out onto the run course.

"They are all really good runners, so we want them to finish - and finish well."

All the Oceanic teams will live side-by-side in the Athletes' Village. It allows them to support each other and share expertise. And hopefully also celebrate each others' medals.