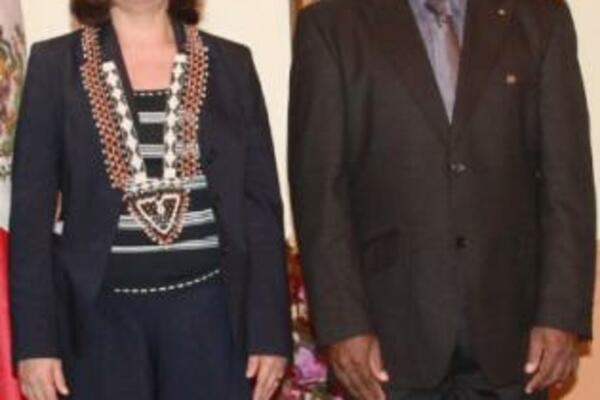 Solomon Islands and Mexico's relationship have further been strengthened on the recent visit of the first ever Mexican Ambassador to Solomon Islands to present her Letter of Credence to the Governor General, H.E Sir Fran Kabui in Honiara.

Ambassador Gargarllo is a graduate from the Universidad de las Americas (UDLA) and joined the Foreign Service of Mexico in 1976. In 2008 she was promoted to the rank of Ambassador. She has served in Consulates in the United States, San Pedro Sula, Honduras and the Mexican Embassy in Greece.

Welcoming Ambassador Gargarllo, Sir Frank said the relationship between Solomon Islands and Mexico has opened the way for further dialogue on many fronts such as bilateral and multilateral engagements through the United Nations and its agencies.

"In this way, we share with you the same values of democracy, human rights and peace and security in the world and the co-operative measures taken to make the world a better place," Sir Frank said.

Sir Frank also added that Solomon Islands can learn and benefit from her relation with Mexico through her economic and commercial potentials.

"This relationship obviously will go a long way in developing a strong and robust strategy for the mutual benefits for our peoples. Surely, we will work something out," Sir Frank said.

Ambassador Gargarllo said Mexico and Solomon Islands share affinities and common interests in the international agenda in a wide range of issues such as environment, disarmament and non-proliferation of nuclear weapons.

She said the aim of building a successful diplomatic relationship with Solomon Islands is an important part in the Mexican Strategy in Foreign Policy to diversify her relations and strengthen her presence in the South Pacific region.

"We have successful experiences in terms of trade, poverty alleviation, culture and education. I do believe that my country would be pleased to share its best practices and lessons learned in those fields, in case the Government of Solomon Islands is of interest. Such cooperation can contribute to strengthen our political dialogue," Ambassador Gargarllo said.

Ambassador Gargarllo is accompanied to Honiara by her husband Mr Gargarllo