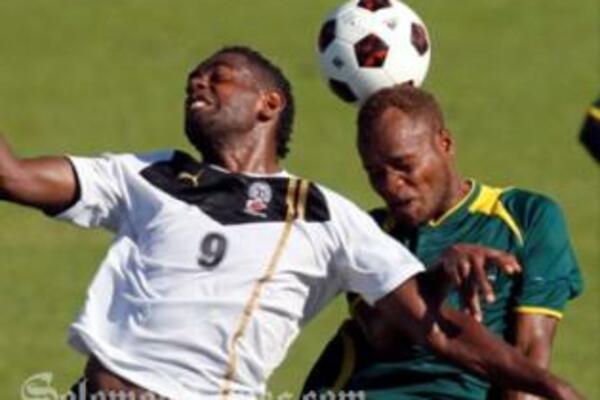 In a nail biting match, Solomon Islands and Fiji ended in a scoreless draw.
Source: oceaniafootball.com
Share
Tuesday, 05 June 2012 08:23 AM

The All Whites became the first side to qualify for the semi-finals - and a place in the next stage of World Cup qualifying in Honiara, Solomon Islands.

Meanwhile Solomon Islands and Fiji are still unsure of their fates after an intriguing OFC Nations Cup yesterday at Lawson Tama Stadium.

New Zealand again struggled in the scorching heat and were made to work very hard indeed for their 2-1 win over Papua New Guinea but it was the second game of the afternoon between the hosts and Fiji that most of the boisterous crowd - the ground was full to its capacity of 15,000 once more - had come to see.

They did not have a goal to cheer but how the stalemate came about was somewhat of a miracle as enough chances arrived throughout the 90 minutes to win far more than just one match.

The results leave the Bonitos and Fiji to fight it out for the remaining semi-final place in Group B and the pool's last round of matches on Wednesday now become vital.

Solomon Islands could still delight their fanatical support by finishing top of the group if they can beat New Zealand while Fiji have to notch a win over Papua New Guinea, who are now out of the equation despite their strong showing today.

The hosts could have avoided needing to get a result against New Zealand by defeating Fiji but their team selection suggested one eye was already on that looming clash with the All Whites. Coach Laurent Papillon chose to make several changes to the side that edged past Papua New Guinea, including the resting of key figures such as Benjamin Totori and Joses Nawo.

"We have a lot of matches to play so need to use all of our players," Papillon said. "We will now have to do well against New Zealand and we have some fresh players to use. Those players may be the key for us in making the semi-finals. Fiji are very strong in the air so we tried to play on the ground but it wasn't sufficient to win."

In an entertaining match that swung from end to end, the home side and their delirious fans thought they had taken the lead when captain Henry Fa'arodo found the far corner of Simione Tamanisau's net but their celebrations were cut short by the raising of the offside flag. A series of chances were then missed by both sides, Joe Luwi and Osea Vakatalesau being particularly wasteful for the hosts and Fiji respectively in the first half.

The deadlock seemed certain to be broken just after the hour mark when Roy Krishna broke clear but Bonitos goalkeeper Felix Ray Jnr dove bravely at his feet to gather the ball safely.

A header from Fiji midfielder Pita Bolatoga was ruled out for offside in the 87th minute before the hosts spurned two great chances in the dying minutes, both opportunities falling to substitute Nicolas Muri. The pint-sized attacker saw the boot of Tamanisau keep out his first effort and he looked odds on to score minutes later but lost his footing before he could get a shot away.

"It will all depend on the last games now," said Fiji assistant coach Imdad Ali, filling in as boss for the bed-ridden Juan Carlos Buzzetti, who is likely to take no further direct involvement after fracturing his hip in a fall. "There is still a lifeline for us and we are hoping for the best."

Krishna had to be stretchered from the field not long after missing his one-on-one opportunity but Ali expects him to be fit for Wednesday's all-important meeting with Papua New Guinea.

Fiji's upcoming opponents missed several opportunities to score today against New Zealand but coach Frank Farina was happy with his side's efforts. "I thought we played extremely well and created some good chances," he said.

"But against a good side you have to take those and we didn't. I think New Zealand only had three chances and they took two." The odds were stacked against Papua New Guinea going into the match and they didn't get any brighter straight after kick off, Shane Smeltz heading home a Jeremy Brockie cross in just the second minute.

Smeltz turned provider shortly after the break for Chris Wood to make it two but Papua New Guinea earned the reward their efforts deserved with a minute remaining, Neil Hans scoring from the spot after Tony Lochhead handled in the box.

"We started well and got a good early goal which has been a trait of what we've done in this tournament," All Whites coach Ricki Herbert said.

"I think it's natural that we'll acclimatise more as we progress and that patch of dominance will extend for longer."Group A moves back into the spotlight tomorrow when New Caledonia take on Samoa at 12pm local time and Tahiti face Vanuatu at 3pm local time.