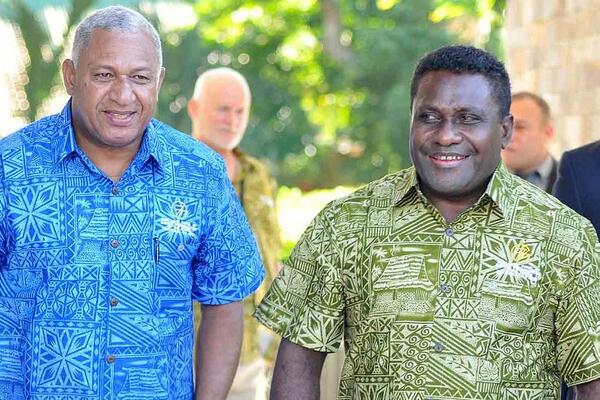 In thanking his Solomon's counterpart for what he described as “a wonderful experience” for the Fijian delegation visiting the country, the Voreqe Bainimarama said it had reinforced his optimism about the future of the Melanesian Spearhead Group.
Source: fijisun.com.fj
Share
Wednesday, 10 July 2013 08:30 AM

Fiji Prime Minister, Voreqe Bainimarama, has urged Solomon Islands to step up its engagement with Fiji, telling his Solomons counterpart that Fiji is more sympathetic and understanding than some of its other regional neighbours.

Commodore Bainimarama was speaking at a final meeting with the Solomons Prime Minister, Gordon Darcy Lilo, at the end of his official visit to Honiara as Chief Guest for the country’s 35th Independence anniversary celebrations.

The Prime Minister said that while Fiji was already a strong partner of Solomon Islands, it was again offering the hand of friendship and assistance and the two countries were in a position to make that partnership even greater.

“As fellow Melanesians, Fijians are more sympathetic and understanding, better suited than some of your other neighbours to assist you in your development. And we are ready and willing to do so”.

The Prime Minister pointed to the many reforms that Fiji had made to improve the quality of governance and improve the lives of ordinary Fijians and suggested that Solomons Islands could learn from some of its experiences.

“We make the offer not from a position of arrogance, of thinking that our way is better. We do so with humility and in the knowledge that we have had to face many of the same challenges you confront. We believe that many of the lessons we have learned in Fiji can be passed on to a valued ally and friend”, he said.

The Prime Minister highlighted Fiji’s fight against corruption, public service reforms to improve efficiency and accountability, the delivery of basic services such as water and electricity, the provision of access to mobile phones and the internet and land reforms to make the distribution of lease monies more fair and free up more land for farming.

In thanking his Solomons counterpart for what he described as “a wonderful experience” for the Fijian delegation visiting the country, the Prime Minister said it had reinforced his optimism about the future of the Melanesian Spearhead Group.

“We have begun to see ourselves as a cohesive, unified force that is truly independent. We are taking charge of our own destiny and carving out our own niche in the world. We don’t see ourselves as beholden to anyone. We will act in our own interests, not the interests of those who attempt to impose their will on us. The days of us being dictated to by outsiders are over”, the Prime Minister added.