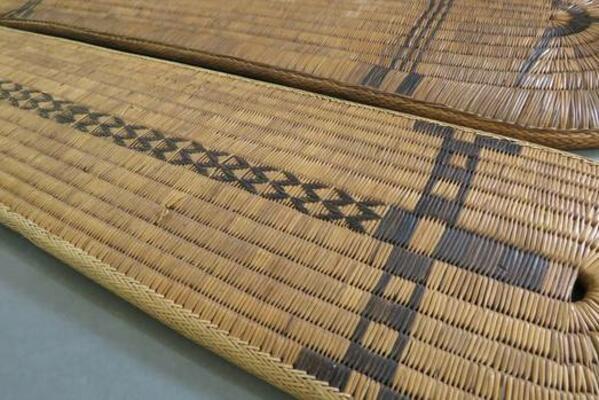 Although chiefly shields had shell and feather adornments, the most common form was more primitive and less decorative such as those in the Museum.
Source: nzherald.co.nz
Share
Wednesday, 12 September 2018 07:36 AM

Among the wealth of weaponry and combative objects of a Whangarei Museum in New Zealand are two intriguing rattan fighting shields from the Solomon Islands.

The smaller shield, along with other Solomon Island relics, was given to the donor Ashton Kelly by Rev Boyce in the 1940s.

During the re-housing of ethnographic items held in the Whangarei Museum, Collections staff were able to closely examine this collection in its entirety and inspect some of the intricacies associated with these artefacts from a monkey skin spear to a feathered bridal mat.

Kelly, born in Whangarei in 1916, met his future wife while sweeping outside his father' store, Kelly's Menswear, in Cameron St, Whangarei where he worked as a teenager. After a four-year courtship the couple married at the Methodist Church, Kaitaia in 1939 and later had two children.

The birth of their daughter Kay came just before Kelly's departure for war service in the Pacific during 1942. Enlisted in the Army, Kelly was recruited as a YMCA field/welfare officer in the 14th Brigade, a formation of the New Zealand Military Forces which served as part of the 2nd NZ Expeditionary Force.

Eventually forming part of the 3rd Division, the brigade served in the Pacific war where thousands of New Zealanders fought covering three main areas, Singapore, in the seas around Japan and in the Solomon Islands.

The Pacific conflict, fought against Japanese forces, was on a vast scale over huge distances and in 1943-1944 the 14th Brigade was involved in the 'Land Battle of Vella Lavella'.

It was while stationed at Vella Lavella in the Solomon Islands that Kelly received the woven shield from Methodist Missionary Rev Boyce, along with other specimens which included woven baskets and a shell dowry bracelet.

Most shields, or lave lave, were constructed of wicker, and have long been used in battle in the Solomons group. Extremely light, strong and manoeuvrable, the shield was essential to the men of the Solomon Islands due to inter-islands warfare.

In battle, these shields were used to deflect arrows and spears as well as execute complex movements. This ability to wield the lave lave was gained after a lengthy apprenticeship during adolescence.

Shields, often passed down through generations, were given only when the young men were deemed ready.

While exhibiting regional variations in their manufacture, most shields were closely woven cane strips decorated with dyed black designs.

Although chiefly shields had shell and feather adornments, the most common form was more primitive and less decorative such as those in the Museum.

Even when no longer used for defensive purposes, the lave lave was still carried everywhere, representing the shield-bearer's social rank as well as his personal identity.

With the NZ Government finding it difficult to sustain the forces in Europe, in 1944 the 14th Brigade was broken up, some men returning home while others like Kelly were transferred as reinforcements to Italy.

Upon his return from war, Ashton Kelly at some point resumed employment at Kelly's Menswear, from where he eventually retired in 1978.

Shortly before his death, the rattan shield and other artefacts were gifted to the museum where they remain as a cultural reminder of the human interactions which took place in the face of adversity.