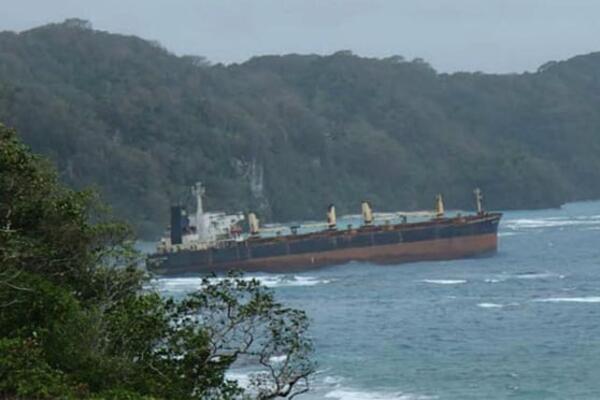 The Bulker Solomon Trader is currently located in a marine protected area and any pollution can seriously affect the environment and livelihood of the local community.
Source: theguardian.com
Share
Wednesday, 20 February 2019 06:37 AM

The Solomon Islands Prime Minister has asked Australia for emergency help cleaning up an environmental disaster after oil spilled from a bulk carrier that ran aground on a coral reef near a world heritage area.

The MV Solomon Trader had been loading bauxite when rough seas pushed it aground at Lavagu Bay, Rennell Island, on the night of 4 February. The ship is currently located in a marine protected area and any pollution can seriously affect the environment and livelihood of the local community.

East Rennell makes up the southern third of Rennell Island, the southernmost island in the Solomon Island group in the western Pacific. Rennell, 86 km long x 15 km wide, is the largest raised coral atoll in the world. The site includes approximately 37,000 ha and a marine area extending 3 nautical miles to sea. A major feature of Rennell island is Lake Tegano, the largest in the insular Pacific (15,500 ha), is brackish and contains many rugged limestone islands and endemic species. Rennell is mostly covered with dense forest, with a canopy averaging 20 m in height. Combined with the strong climatic effects of frequent cyclones, the site is a true natural laboratory for scientific study.

Situational reports seen by the Guardian say “heavy fuel oil/black oil could be seen 800 metres” from the vessel. “Discoloured brown water was observed in the lagoon approximately 600 metres south east.”

The report said the vessel could not proceed anywhere under its own power and would have to be towed.

“Indications are that the oil leak gets worse at low tide. At low tide the oil is going directly onto the exposed reef.”

On Tuesday the Australian Maritime Safety Authority was preparing a Hercules C130 military plane with clean-up gear, and a naval ship with equipment was also likely to be diverted. Australia has sent a surveillance plane to the site.

“The weather has moderated,” he said. “The sea is still running very heavily and it’s diffusing the oil, it’s leaking at a low rate. It’s starting to spread as slick.”

The source said there was gas oil and heavy fuel oil on the ship.

“Nothing has been done for the past two weeks because of the weather, but now the weather has eased down, we can get people across,” a spokesman for the maritime administration said.