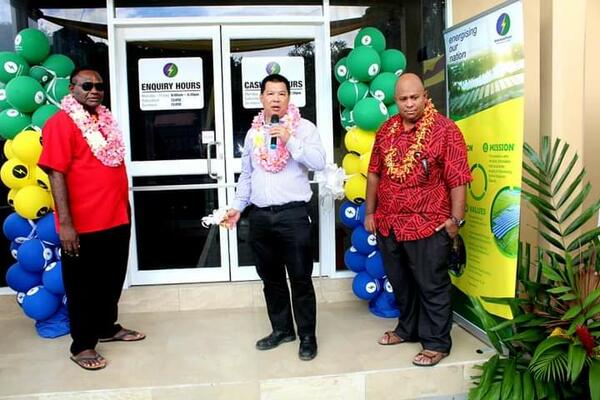 The office was officially opened on the 5th of November 2021 by the Chairman of the Board of Directors, Mr. David K.C. Quan O.B.E and the Premier of Central Province, Honourable Stanley Manetiva.

The new office is a single story building and will house the administrative office, cashier, and customer services. Solomon Power’s Board of Directors and Executive Management were in attendance at Tulagi to witness the event.

Speaking at the event, Chairman of the Board of Directors, Mr David K.C Quan O.B.E said “this is a very important and momentous occasion for Tulagi and also for Solomon Power that as you all know has a very aggressive Capital Works programme that includes all the upgrades to all offices, staff houses network extensions and power stations. So this is part and parcel of that very aggressive programme that we continue to roll out throughout the country”.

The Premier of Central Province, Stanley Manetiva in his speech stated that he is honoured to be a part if the official opening of the new building and highlighted proposed infrastructure development in Tulagi that will increase power requirements in the provincial capital.

The Contractor of the Tulagi building was 2CMJ Builders. In her speech, Eve Mali, Managing Director of the company said that they were happy that the project has achieved what it set out to do and also requested all Tulagi residents to be proud stewards of the building. “To our good people of Central Province especially residents of Tulagi the building is an icon and must be a pride for you”, Mrs. Mali said.

The Chief Executive Officer (CEO) of Solomon Power, Mr. Donald Kiriau thanked everyone who were involved in one way or another in making this project possible and a successful one, and also wished to thank its partners, stakeholders, as well as the national and provincial government for the support and cooperation. He said, “Despite COVID we are still actively engaged in our communities, opening new offices. In July we opened the Gizo office and now in November we are opening Tulagi.”

This is a facelift for Solomon Power in Tulagi and it sets a trend for all other stations in the provinces as Solomon Power continues with its vision of energizing the nation.

Solomon Power has been renting an office space since October of 2020. The office will commence serving customers on Monday 8th November 2021.