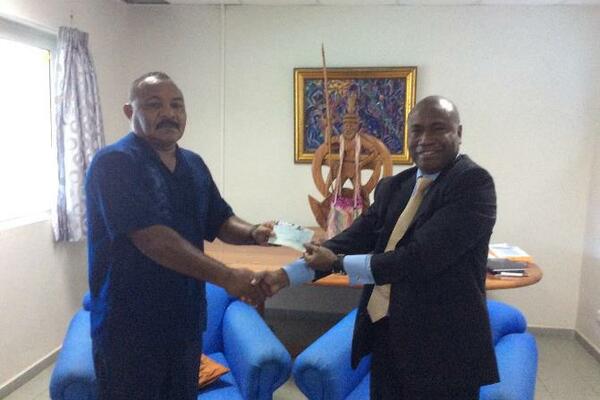 The Africa, Caribbean and Pacific (ACP) Group of states whose Secretariat is based in Brussels, Belgium has this week responded to the cyclone Pam relief appeal by the government of Vanuatu by sending a humanitarian Mission to Vanuatu.

The objective of the ACP Humanitarian Mission to Vanuatu was to meet with government leaders; relevant authorities, aid agencies and local community representatives to identify priority needs of the country to assist in its rehabilitation and rebuilding phase in the aftermath of the widespread destruction caused by cyclone Pam.

The Mission led by the Solomon Islands Ambassador in Brussels, HE Moses Mose met with the Prime Minister of Vanuatu, Hon Joe Natuman and other key Ministers of the government.

During the meeting with Hon Natuman, Mr Mose conveyed to the Prime Minister the sympathies and condolences of the ACP member states in the tragic loss of lives during the height of cyclone Pam on the 14th March 2015.

Ambassador Mose, who also represented the ACP Committee of Ambassadors and the Secretary General of the ACP Secretariat in Brussels, also conveyed the support and commitment of the ACP members in providing assistance to Vanuatu in its recovery and rebuilding phase.

In response, Prime Minister Natuman expressed his deep gratitude and appreciation for the support and political solidarity of the ACP member states. He also used the opportunity to convey his sincere appreciation and gratitude on behalf of his government and people for the financial pledges, contributions and assistances in kind by Pacific ACP member States, for cyclone relief needs in Vanuatu.

Ambassador Mose also met and held discussions with the Acting Minister of Foreign Affairs, Hon George Wells in which he handed to the Minister a cheque of 20,000 EURO on behalf of the ACP for immediate relief efforts in the country.

Ambassador Mose was accompanied in the Mission by Mr. Noah Patrick KOUBACK, Counsellor of the Embassy of Vanuatu to the European Union in Brussels.