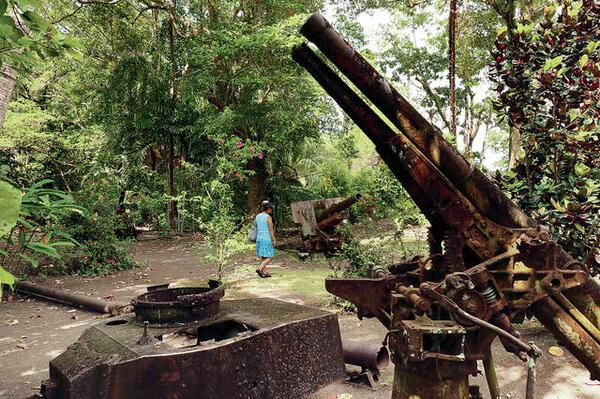 If a remote South Pacific destination with lots of World War II artifacts and world-class diving appeals to you, check out the Solomon Islands.

This 992-island archipelago sits northeast of Australia. Most of its 550,000 citizens are Melanesians and almost everyone speaks English.

To reach the Solomon Islands, my wife, Sharen, and I took Fiji Airways’ 10-hour, nonstop flight from Los Angeles International Airport to Fiji, and, following a brief layover, we continued with a three-hour flight to the Solomon Island’s main island, Guadalcanal, famed for its World War II land, air and sea battles, and now the home of the country’s largest city and capital, Honiara.

The islands ooze with war stories and mementos, beginning with Honiara International Airport, still called by its wartime name, Henderson Field, whose possession precipitated the bitterly fought Guadalcanal campaign and the deaths of more than 30,000 soldiers. Our guide explained that the waters by Honiara are so filled with warships and planes that it’s called Iron Bottom Sound.

When we arrived in Honiara, we weren’t quite prepared for the wave of heat and humidity that enveloped us, nor Honiara’s rough, litter-laden main road. Fortunately, once we left town on our 45-minute drive to the Vilu War Museum, the specialness of the Solomons became clear as we strolled through an extraordinary collection of war artifacts that included remnants of fighter planes, tanks, howitzers and anti-aircraft guns nestled incongruously among the flowering shrubs.

As a snorkeler, I was determined to explore some of the island’s world-famous war wrecks, so on our way back to town, we drove to a private beach with our first wreck — the 440-foot Kinugawa Maru (or “Bonegi 2”) that sank on Nov. 15, 1942, after being bombed by the Allies. The massive wreck proved to be a snorkeling wonderland, sheltering a profusion of colorful corals, sea fans and fish throughout the rusting skeleton.

Before returning to our hotel, we stopped at Lumatapopoho Village, where the betel-nut-chewing owner, his wife and daughter, and gaggle of kids, all of whom wore only homemade loincloths, demonstrated “the old ways” of making a fire by twirling a stick, making clothes from special tree bark, cooking over hot rocks and constructing a roof from palm fronds.

The next afternoon, we boarded a small plane for the 50-minute flight to Munda, where we landed on another WWII runway. A five-minute walk to the only lodging in town led us through the placid but littered little town. That afternoon a cheerful local man showed up in his restored WWII American Jeep and drove us to the Peter Joseph WWII Museum, with its extensive collection of war relics displayed in an open-air shed built, not surprisingly, during the war. Rows of wood tables displayed piles of American and Japanese soldiers’ combs, helmets, dog tags and assorted weapons, and I wondered if ghosts still lingered among those lifeless artifacts.

The next day, we set out in a small motorboat to explore a distant location known for its huge plate corals, a WWII Grumman F4F Wildcat fighter lying in 40 feet of water, and another beached Japanese cargo ship. These proved to be fascinating sights, but the best part of the outing was yet to come.

A somber sky, laden with wind-tossed, gray clouds, provided an appropriate setting for our visit to Skull Island, aptly named for its assorted skulls of chiefs and vanquished warriors. We waded to the small but sacred island, where we encountered a long, chest-high mound of jagged coral rocks interspersed with wood and rock niches sheltering dozens of weathered, sinister-looking skulls, some of which had telltale holes in the cranium the size and shape of an ax blade.

An easy 15-minute flight brought us to our final and favorite destination, a resort with the improbable name, Fatboys Resort. We were greeted with flower leis and a coconut drink as we disembarked at the resort’s restaurant, majestically suspended above the water at the end of a 100-yard walkway. The restaurant provided delicious meals and breathtaking views of crystal clear, turquoise waters framed by distant islands. At night, the two spotlights in the water below our table attracted swarms of exotic fish and harmless reef sharks that glided past the lights before disappearing into the darkness. Our server pointed to a nearby, nondescript little island and explained, “That is Kennedy Island, where JFK and his crew swam after their boat was sunk by the Japanese.”

At our request, the resort arranged for a remote island picnic and a JFK history tour that proved to be the highlight of our trip. We began with a 10-minute boat ride to Kennedy Island, where a monument detailed the story of Kennedy’s island odyssey and eventual rescue. History came alive as our boat followed the route of JFK and his crew who swam from island to island for survival.

Soon our two boats and staff landed on a remote, uninhabited sandy beach, and after making a fire, the cooks prepared a picnic with all the grilled lobster, fish and vegetables we could eat, accompanied by chilled wine and beer — my all-time favorite meal.

The warm, azure waters by Fatboys’ beach offered such a bonanza of live coral and colorful fish that we made a point of snorkeling there at least twice a day. The icing on the cake: From our room’s balcony, we gazed at a vast expanse of tropical water so filled with myriad blue hues that my wife gasped, “This is my favorite hotel view ever.”

When we returned to the United States, I compared impressions of the Solomons with Matt Meier, a professional underwater photographer with extensive tropical diving experience, who had just returned from a 10-day, live-aboard dive boat in the Solomon Islands. After viewing his jaw-dropping set of underwater photos of places and creatures that had been inaccessible to us, I grasped the magnitude of difference between our trips.

As Matt explained, “I would highly recommend the Solomon Islands because of its pristine reefs, lack of other divers in the remote areas, and giant sea fans and plate corals that are the largest I’ve ever seen.”