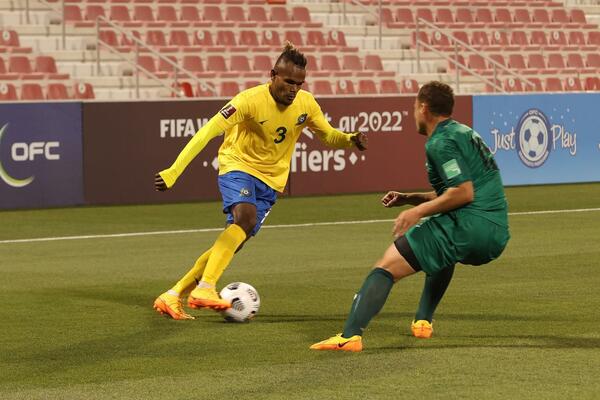 Solomon Islands defeated Cook Islands 2-0 in their opening match. Win or loose against Tahiti they will proceed to the semi-finals.
Source: File
Share
Monday, 21 March 2022 15:15 PM

The Solomon Islands national football squad will advance to the knockout stages of the FIFA World Cup Qatar 2022 Oceania Qualifiers as Vanuatu pulls out of the competition due to COVID-19.

Vanuatu was supposed to play the Solomon Islands on the 20th of March 2022 (Day 3 of competition) but has since withdrawn from the competition. Vanuatu was also forced to forfeit their opening game against Tahiti.

The Vanuatu decision follows tests conducted on March 17, 2022 that revealed positive cases of COVID-19 in the majority of Vanuatu’s team, ahead of their match against Tahiti.

The Oceania Football Confederation has confirmed that due to a vast majority of their squad testing positive to COVID-19, Vanuatu have informed FIFA of their withdrawal from the tournament.

In line with the applicable protocol and given the seven-day quarantine requirement, the Vanuatu Football Federation has confirmed to FIFA that it’s not in a position to play its upcoming FIFA World Cup qualification matches.

FIFA has forwarded the relevant details to its Disciplinary Committee. Until further notice, Vanuatu’s FIFA World Cup qualification matches are deemed to be abandoned.

In all likelihood, Solomon Islands and Tahiti will play in the semi-finals against the winner and runner-up of Pool B.