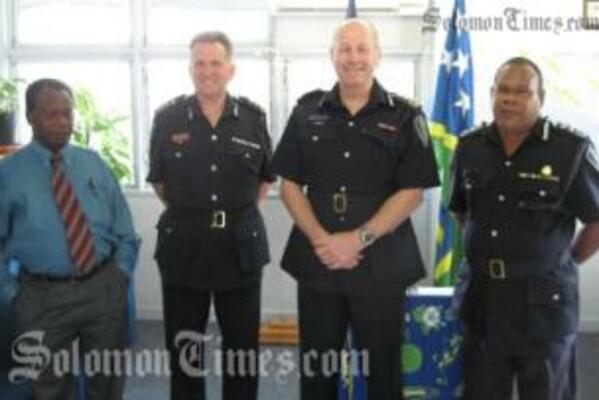 The new Deputy Commissioner of the Royal Solomon Islands Police Force Wayne Buchhorn was sworn in to office and warmly welcomed by the RSIPF Executive.

Mr Buchhorn arrived in the Solomon Islands last week to take up his role as the new Commander of the Participating Police Force for the Regional Assistance Mission to Solomon Islands. Current PPF Commander Denis McDermott officially hands over his responsibilities on June 6.

Commander Buchhorn is the fifth PPF Commander to be appointed as Deputy Commissioner within the Executive of the Royal Solomon Islands Police Force.

RSIPF Commissioner Peter Marshall said the appointment of Commander Buchhorn as Deputy Commissioner of the RSIPF was "hugely important" and both practical terms and symbolic meaning.

"This reinforces the close relationship between the PPF Commander, the RSIPF Executive and the RSIPF as a whole," he said.

Commander Buchhorn has served as Manager Counter Terrorism International with the Australian Federal Police in Canberra since 2007. He also served in postings in Singapore from 2002-2004 and was the AFP's Manager Indonesia based in Jakarta from 2004-2007.

Commissioner Marshall said the role played by the RSIPF in the future success of the country was absolutely pivotal and he welcomed the Deputy Commissioner's contribution to the organisation.

After his swearing-in ceremony, Commander Buchhorn expressed his appreciation to the RSIPF Executive for the opportunity to work with them in the role of Deputy Commissioner.

"I am looking forward to working with my colleagues within the RSIPF, Executive Members and the Commissioner," he said.

"It is important we work collectively to ensure the success and prosperity of the Solomon Islands."