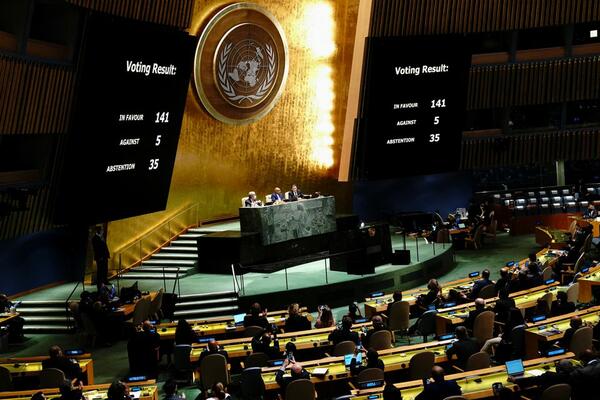 A general view shows the results of the voting during the 11th emergency special session of the 193-member U.N. General Assembly.
Source: Reuters
Share
Thursday, 03 March 2022 10:32 AM

141 countries also voted in favor of the resolution, deploring Russia’s aggression against Ukraine and demanding the immediate and complete withdrawal of all Russian forces from Ukrainian territory.

While the resolution is non-binding, it does reflect Russia’s historic isolation on the world stage just one week into his unprovoked invasion of Ukraine.

Ukrainian President Volodymyr Zelensky praised the outcome of the vote, tweeting, “I’m grateful to everyone and every state that voted in favor. You have chosen the right side of history.”

He says the results “convincingly show that a global anti-Putin coalition has been formed and is functioning. The world is with us. The truth is on our side.”