Solomon Islands U19 Makes it to Semi-finals 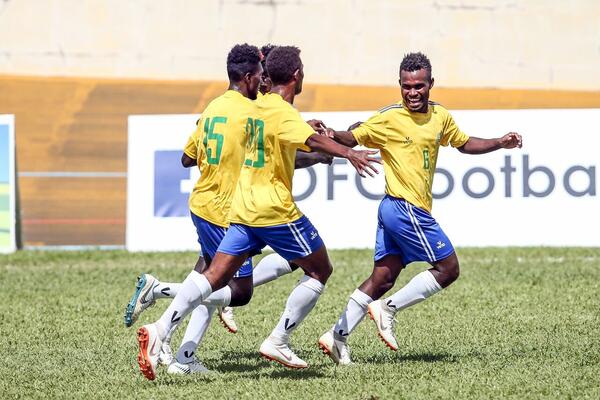 Already assured a place in the semi-finals, Solomon Islands entered the match a step off their usual form.

Coach Batram Suri made some changes to his starting lineup leaving some of his first choice players on the bench.

It was an evenly-contested match where any clear-cut chances were limited by both teams’ defensive players.

Solomon Islands closest chance early on was a free kick by central defender Aengari Gagame in the 13th minute.

However the defining moment of the match arrived two minutes later as Patrick Taroga leapt high to meet a corner delivery and head it into the net.

The scoreline remained at 1-0 at half-time as both teams went into the sheds with plenty to ponder.

Vanuatu’s best chance of the second half saw Jordy Tasip go up against Joel Nanago only for the final effort to go off target.

Making matters worse for Vanuatu, Zidane Maguekon received a red card with 15 minutes remaining, making the task even tougher for the team.

Solomon Islands substitute Simon Jedzini had two good chances to score when his side had the numerical advantage, however he fired off-target.

Despite being a man down kept pushing their opponents but they held strong until the final whistle to earn the 1-0 victory.

The win means Solomon Islands topped the group with nine points from three wins to set up a semi-final with hosts Tahiti.

Suri was pleased with his team’s overall performance as they walked away with another important win in the tournament, but felt they could have done a bit better.

“Well with the performance in the first half we didn’t perform because the wind was against us,” he said.

“The boys kept on going to at least score a goal that made us win the game. The first was not good but we came back in the second half to play a bit more.

“Now we are focusing on the semi-final since there is still more work to do.”

Vanuatu coach Kaison Maki expressed his disappointment at not making it to the next stage of the competition.

“I think we learned a lot, the players and coaches, especially the technical team,” he said.

“We will go back and work on our weaknesses and build from there for the next tournament.”