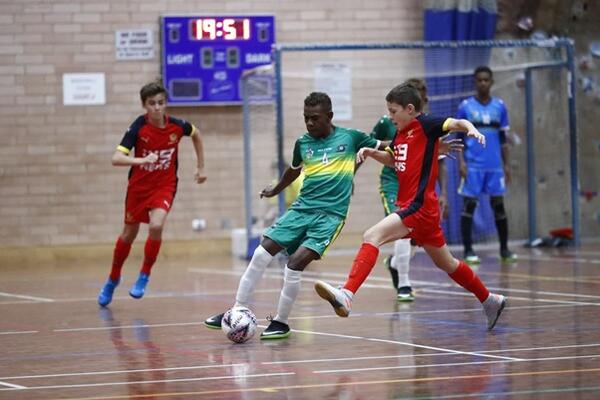 The Solomon Islands U14 boys team proved too strong for a spirited Football SA Blue outfit, claiming a 9-0 win on Tuesday.

Solomon Islands started strong with lots of early pressure on the SA Blue defence. It didn’t take long for them to breakthrough, however, partly due to a goalkeeping error.

Junior Joseph Nasihumu lofted the ball towards Calen McCormick, but the SA keeper couldn’t get his hands to it enough and it fell into the back of the net.

The Solomons kept their pressure up after the goal adding a second only a few minutes later. Grayham Aneka blasted the ball into the back of the net.

To their credit, SA put their own pressure on but lacked the finishing touch as they struggled to break down a strong defensive structure.

Despite their best efforts, SA conceded a third goal as Abraham Iniga extended the visitor’s lead halfway through the first stanza.

Luca Schmitt looked dangerous for SA but George Maniato was equal to the task, keeping the Solomon’s lead intact.

The Solomons started to pile on the goals with Nasihunu adding a second, and Iniga completing his hattrick.

Solomon Islands went into the break with the lead comfortably intact, up by six goals to nil.

It was a similar story to the second half as the Solomon’s continued their dominance with two early goals to Michael Junior and Tony Maefiti.

Despite the scoreline, SA continued to press and could’ve easily had grabbed a few goals had it not been for the timely interventions of the Solomon’s defence backed up by Charles Ulasi in goals.

Nasihunu would complete his hattrick as the Solomon’s continued their rout. SA would have no answers for a fast and skilled Solomon Islands side as the game finished nine goals to nil to the Islanders.

Solomon Islands will now take on Football SA Red in the Quarter finals, set to kick off today at 12 (Canberra Time).