Solomon Islands Too Strong for Fiji 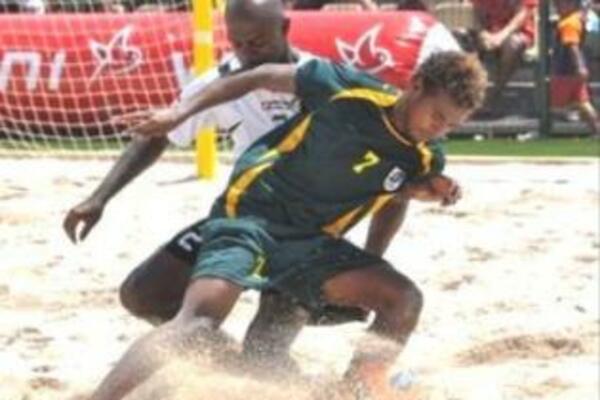 The Solomon Islands' quest to qualify for their fifth consecutive FIFA Beach Soccer World Cup began well today as they defeated a resilient Fiji side 9-4 in the opening match of the OFC Beach Soccer Championship Tahiti 2011.

In humid, windy conditions at Papeete's Jardin de Paofai, the defending champions started slowly but eventually took control of the match as Robert Laua and Franco Ne'e led the way scoring a hat-trick each.

Coach Henry Koto was pleased with the performance, which also featured a brace for captain James Naka and one goal to McPhillip Aisa.

"The wind made it a bit difficult today but with the experience within the team I think they handled the conditions well and played a good game," said Koto.

"I'm very pleased with Robert Laua who I thought was tremendous. He is a very young player, he gives everything, he is consistent and today he showed what he can do scoring a hat-trick."

The formidable Naka got the scoring underway with a lethal free-kick after four minutes before Ne'e got the first of his three from another dead ball situation two minutes later. Fiji showed they meant business, hitting back through Jo Dugucagi, while the Solomon Bilikiki suffered another set back in the first period when Gibson Hosea was stretchered off with a suspected torn ligament in his knee.

But the favourites found their stride in the second third putting four unanswered goals past the Fijians.

Intiaz Khan's men staged a spirited fight back in the final period with a second goal for Dugucagi and strikes to Raju Ratan and Archie Watkins helping the underdogs finish on a high.

"It was a positive way to end it," said Khan. "And the boys will take confidence going into the next match against Tahiti tomorrow.

"We were expecting a solid performance from the Solomon Islands and they deserved the win today. But my team, many of them newcomers to beach soccer, stood up to the challenge and fought hard."

"The Solomon Islands are known as the Brazilians of the Pacific and they've been to four world cups," said the Fiji goalkeeper.

"For most of our team, we are better known for 11-a-side. But we played with pride today and we're pleased to score four goals past them and show that we can compete.

"Tonight we'll watch a video of the match and see where we can improve. Mostly I think we need to work on our defense, especially managing the balls thrown from the goalkeeper into their forward players."

His Solomon Islands counterpart also believes there is room to improve for his side.

"The first game of a tournament is always difficult because the team is still coming together," said Naka. "There are things to work on after today's game but we got the result we wanted. We think Tahiti will be a tougher challenge, but we have an opportunity to rest tomorrow before facing them."

Solomon Islands will now take on hosts Tahiti later today, before the top two teams square off in Saturday's final to see who will go through to the FIFA Beach Soccer World Cup 2011 in Italy.