Solomon Islands through to U20 Finals 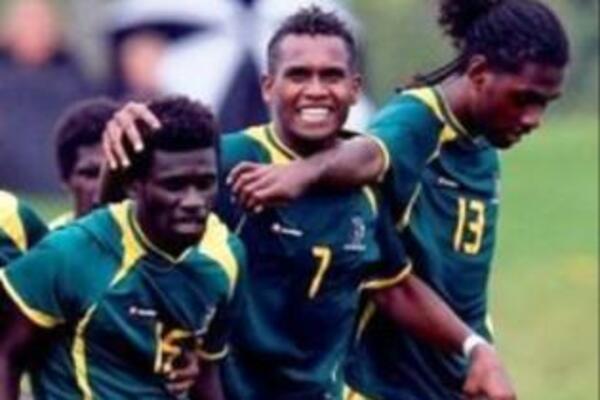 The Solomon Islands Mamulas have advanced to the final of the OFC U-20 Championship by posting a thrilling extra-time penalty shoot-out win over Vanuatu after the scores were locked at 3-3 in today's first semi-final.

The Mamulas will now meet the winner of the other semi-final, which takes place between favourites New Zealand and Fiji this afternoon.

Vanuatu, who were coming off the back of three straight victories in the group stages, began with the confidence expected of an undefeated side and did not take long to get their noses in front.

Indeed, there were only eight minutes on the clock when Silas Frank broke down the right and whipped a cross into a dangerous area inside the Solomon Islands box. Goalkeeper Silas Seda came out to meet the ball but could not gather it cleanly and fumbled into the path of Didier Kalip, who was not about to pass up such a gift-wrapped opportunity to give his side the lead.

Considering Vanuatu had yet to lose in the tournament and had looked to be one of the slickest sides on show in Auckland this week, it appeared that the Solomon Islands would face a steep uphill battle to get back into the game.

But the Mamulas, as they are known in their football-mad nation, slowly began to creep into the contest and were very nearly awarded for their increased tempo in the 23rd minute.

Vanuatu goalkeeper Seiloni Iaruel was forced from his line to deal with a piece of Solomons pressure and was ruled to have brought down striker Tutizama Tanito. Fellow forward Dennis Ifunaoa stepped up to take the spot kick and struck it cleanly but saw Iaruel get down well low to his left and beat the effort away to maintain his country's one-goal advantage.

The Mamulas may very well have been made to pay for spurning that opportunity but instead had to wait until only midway through the half to draw level. Ifunaoa broke down the left in the 25th minute and squared for midfielder Himson Teleda to control and turn before placing a shot past Seda to restore parity.

Coach Noel Wagapu then had a moment of individual flair to thank for his young charges going ahead. The magic was again provided by Teleda, who dispossessed Vanuatu defender Kevin Shem near the byline in the 42nd minute and jinked his way around another challenge before slipping the ball home to make it 2-1 at the break.

Vanuatu were now at risk of going out of the tournament and came out strongly in the second half as they attempted to keep their hopes alive. But much of the possession and chances went on to be shared between the sides in an evenly-matched second spell.

When a goal finally did arrive in the 78th minute, it went to Vanuatu and the identity of the scorer was no surprise. Jean Kaltak has been a constant menace to opposition defences throughout the tournament and had another strike to his name when he latched onto a cross from Kalip and beat goalkeeper Seda with an accomplished finish.

Despite some nervy moments for both sides in the dying minutes, there was no further score and an extra half an hour was required to find out who would advance through to the final.

The Mamulas gave themselves a great chance of being that team when they went ahead just two minutes into the extra-time period.

Substitute Larry Sae was the hero when he nipped in between goalkeeper Iaruel and defender Brian Kaltak as they both left a loose ball to each other. Sae took full advantage of the pair's indecision by sliding the ball into the net left vacant by Iaruel.

Wagapu's men now had one foot in the final but, having scored so early, had most of the extra time still to play out and hang onto their lead. They nearly managed to do so, reaching the 115th minute before Kevin Shem scored a dramatic leveller.

There appeared to be little danger when Shem lined up a free kick fully 35 yards from the Solomon goal. But the defender became his team's saviour when he somehow curled the ball into the top corner of Seda's goal to take the match to a penalty shoot out.

The Solomons had the sharp reflexes of Seda to thank for their spot kick success after the custodian beat away both of Vanuatu's opening penalties, from Willie-Ola Jimmy and Kalip respectively, to give his side the advantage. The Solomons also missed their first effort - a blasted shot from Chris Tafoa which sailed well over the bar - but scored their next three to put the pressure on Vanuatu's final taker, midfielder Pascal Chabot.

To the horror of his team mates and the joy of the opposition, Chabot did not connect well with his strike and the ball bobbled wide of Seda's left-hand upright to spark scenes of wild celebration and book the Mamulas a place in Friday's final.

Wagapu was delighted to see his side earn the chance to compete for a place at the FIFA U-20 World Cup but had plenty of sympathy for the beaten side.

"There was a lot of good football and it could have been anybody's game. Whenever teams go out that way, I can always sympathise with them because it is very unlucky. But it is a lesson to us all that a team who prepares well should be able to win in the 90 minutes - if it goes to extra time or penalties it is a lot harder to win and becomes a lottery.

"Our boys are lucky to get through and it is a pity for Vanuatu to go out like that. It was a very emotional game for my management and I because it swung from one minute to the next and, when two quality teams are playing, it is hard to determine who is going to win."

Vanuatu coach Moise Poida was hit hard by the manner of the loss and feels his side have only themselves to blame for the defensive slip-ups that cost them the match.

"I felt we dominated the game and I think we are a stronger team than the Solomons," he says.

"Physically, they are bigger but even though we are small I think we are just as good. We played well but missed a lot of opportunities and gave away three goals. We got punished by our own mistakes.

"I think we should have been in the final but we gifted that to the Solomon Islands."