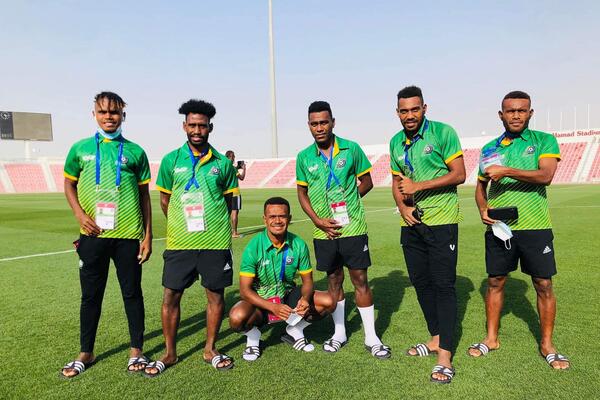 Despite the chaotic scenario that has unfolded in Oceania qualifying, the Solomon Islands will need to remain focused if they are to reach the inter-confederation playoffs.
Source: Supplied
Share
Wednesday, 23 March 2022 16:20 PM

Solomon Islands will come up against Tahiti at the Al-Arabi Stadium, with the two sides battling it out in World Cup 2022 qualifying.

Group A in Oceania qualifying has been widely affected by COVID-19 cases, with Vanuatu forced to withdraw, while Cook Islands were unable to field a team in their second match of the tournament.

After Vanuatu withdrew and Cook Islands unable to field a team it seems both teams will progress to the semi-finals.

Despite the chaotic scenario that has unfolded in Oceania qualifying, the Solomon Islands will need to remain focused if they are to reach the inter-confederation playoffs.

Before the COVID-19 outbreaks, the side ranked 141 in the world got their campaign of the perfect start, with a 2-0 victory over the Cook Islands.

Meanwhile, Tahiti are yet to play in qualifying after their scheduled opener against the Cook Islands was postponed. With Vanuatu not taking part in qualifying, Thursday's contest represents Tahiti's sole group stage game.

Although Tahiti are expected to also advance to the semi-finals, they will be desperate to get some minutes under their belt.

They will also be hoping to finish in first position in the group as they look to avoid New Zealand in the last four, with the Kiwis expected to top Group B.

Samuel Garcia's charges will be confident that they can pick up the three points, as they seek to draw inspiration from the 3-0 win that they achieved against the Solomon Islands in the last competitive meeting between the two nations in 2019.

Tahiti's all-time goal scorer Teaonui Tehau will be of the key players for Garcia's side on Thursday, and he could be joined in the front line by Raimana Li Fung Kuee.

Meanwhile, Teaonui Tehau's cousin is expected to feature, with Alwin Tehau set to line up in midfield. After scoring in the opening qualifier, Kaua and Hou will both retain their places in the starting line-up.

Gagame Feni came on in the second half against Cook Islands, and he could be in contention to start on Thursday.

Regardless of the outcome both teams are set to progress through to the knockout stage.