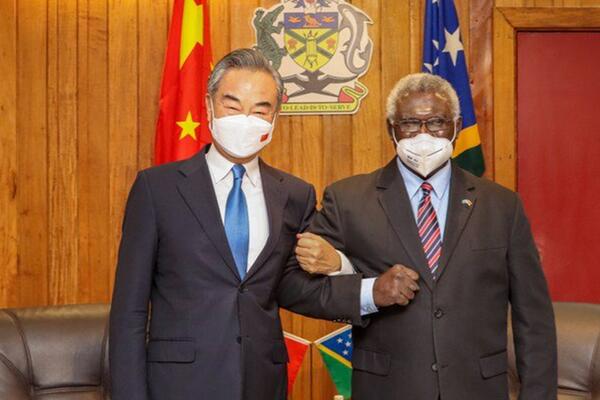 Dozens of countries have voiced concern about alleged abuses in China’s far western Xinjiang region, and demanded that the United Nations rights chief publish a long-delayed report on the situation there.
Source: MFA
Share
Tuesday, 21 June 2022 10:53 AM

China’s investments in the Solomon Islands is paying dividends, in the form of support to China on crucial UN votes or joint statements.

Solomon Islands was part of a Joint statement of 69 countries at the Interactive Dialogue on High Commissioner's annual report at the 47th session of the Human Rights Council.

The statement called for the respect for sovereignty, independence and territorial integrity of states and non-interference. The statement also reaffirmed that Hong Kong, Xinjiang and Tibet related issues are China's internal affairs that brook no interference by any external forces.

“We oppose politicization of human rights and double standards. We also oppose unfounded allegations against China out of political motivation and based on disinformation, and interference in China's internal affairs under the pretext of human rights,” the joint statement reads.

Dozens of countries have voiced concern about alleged abuses in China’s far western Xinjiang region, and demanded that the United Nations rights chief publish a long-delayed report on the situation there.

“We continue to be gravely concerned about the human rights situation in Xinjiang Uighur Autonomous Region,” Paul Bekkers, the Dutch ambassador to the UN in Geneva, told the UN Human Rights Council on Tuesday.

The joint statement also voiced concern about “reports of torture and other cruel, inhuman or degrading treatment or punishment, forced sterilization, sexual and gender-based violence, forced labour, and forced separation of children from their parents by authorities”.

The concerned countries, Bekkers said, “repeat our call on China to urgently address these concerns”, and to “end the arbitrary detention of Muslim Uighurs and persons belonging to other minorities”.

The statement by China and supported by the Solomon Islands is a concern, Solomon Islands should be championing or supporting the push for the release of the long-delayed report on the human rights situation in Xinjiang. We should also be supporting statements that speak up against the violation of human rights, wherever they occur.

It is becoming very clear based on Solomon Islands voting record in recent times, particularly at the Human Rights Council, that Solomon Islands is being influenced or coerced by China.

Solomon Islands has been quick to condemn the treatment of West Papuans in Indonesia at the Human Rights Council, despite its diplomatic relations with Indonesia and the fact that Indonesia also funded the recently completed Futsal stadium. That is how we should be conducting ourselves in such international forums – we stand up for our values and principles.

Unfortunately, the Solomon Islands, but more poignantly this government, is compromising itself and continues to vote against its own values, values that we share with other democracies. China on the other hand has gained an additional vote as it continues to protect its interest and those that share common values with them such as Russia, Iran and Venezuela.