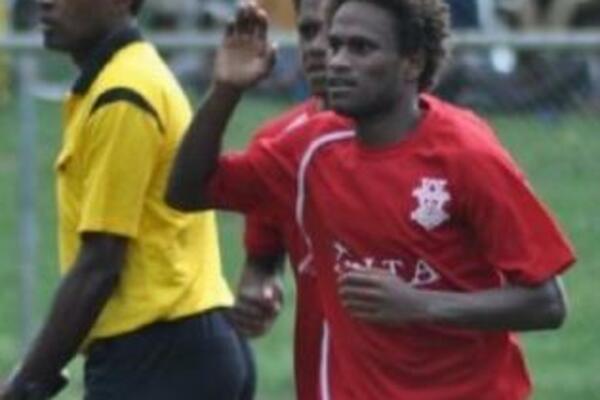 Striker Dennis Ifunaoa is in line for a place in the Solympics squad.
Source: boxscorenews.com
Share
Friday, 13 January 2012 08:33 AM

Nearly 50 talented young Solomon Islanders will face some anxious moments over the coming days as they attempt to force their way into the 'Solympics' national U-23 squad for the Oceania qualifying tournament for the London 2012 Olympics.

A total of 46 players are currently in the training squad but that figure will be culled to just 20 for the qualifying tournament, scheduled to take place in March, and the trimming down process is set to start on Monday.

Most of the players selected are regulars in the Telekom S-League and the core of the group featured in the Solomon Islands U-20 squad that finished runners-up to New Zealand in the 2011 OFC U-20 Championship in May.

Key names in the squad include the Solomon Warriors striking duo of Micah Lea'alafa and Dennis Ifunaoa while the likes of Leonard Rokoto, Silas Seda, Himson Teleda and Chris Tafoa have stepped up from the U-20 team. Several members of the Kurukuru national futsal side have also made it into the squad, such as Kurukuru captain Elliot Ragomo, forward Jack Wetney and pivot James Egeta.

The squad cutting will take place during a series of test matches set to be held over the next week. The matches are being organized by the Solomon Islands Football Federation (SIFF) technical department and will be held at the SIFF academy complex grounds in Honiara under the supervision of Noel Wagapu and Gideon Omokirio.

Wagapu is confident about the quality of the players and says that, as usual, picking out the top crop will not be an easy task.

"There are many good players at the youth level and I am sure that a strong team will come out of the current training squad," he says. "We will not have an easy time picking the best players but the onus is on the players to show us they have what it takes to represent Solomon Islands."

The venue for the OFC Men's Olympic qualifiers is yet to be confirmed but the competition is already gathering momentum with several countries also preparing their squads. Papua New Guinea announced in December that former Australian national coach Frank Farina will lead their line-up while the Fiji squad features players from some of the country's top teams and completed an eight-day training camp this week.

New Zealand is likely to be the side to beat after winning the tournament in 2008 and going on to represent OFC at the Beijing Olympics later that year.