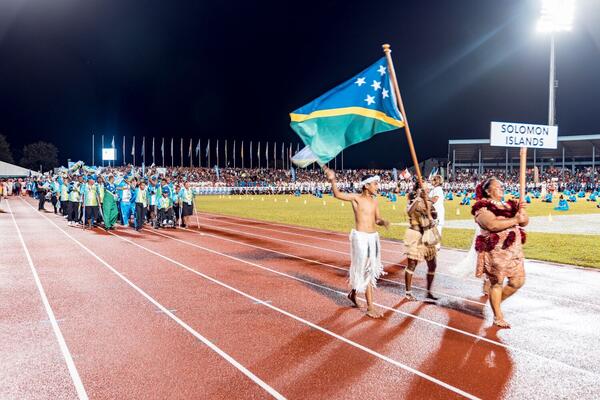 The facility would have a maximum capacity of 12,000 people, deemed suitable for the Games and ensure easy maintenance.
Source: Supplied
Share
Thursday, 11 July 2019 10:55 AM

The Solomon Islands government has signed a Memorandum of Understanding (MoU) with Taiwanese company, Fu Tsu construction company, for the development of the National Stadium.

This is in preparation for the 2023 Pacific Games which will be hosted by the Solomon Islands.

The MoU was signed by the Chairman of the National Hosting Authority (NHA), Dr Jimmy Rodgers, who is also the Secretary to the Prime Minister, and Chairman of Fu Tsu Construction company, Cliff Lin.

The agreement builds on a similar MoU signed in March, which confirmed funding from Taiwan and Fu Tsu’s involvement of designing and constructing the National Stadium.
Under the terms of the first agreement, it was confirmed Fu Tsu would be responsible for the design of an International Association of Athletics Federations (IAAF) standard venue.

The facility would have a maximum capacity of 12,000 people, deemed suitable for the Games and ensure easy maintenance. The stadium is expected to host several events during the 17th edition of the Pacific Games, including athletics competition.

Consultations on the stadium bid process has taken more than three years, prior to Fu Tsu Construction being confirmed as the contactor by the Government.

The latest MoU has outlined the parameters and time lines for the design and construction process. Chairman of Fu Tsu Construction company Cliff Lin thanked the government of Solomon Islands for selecting Fu Tsu to design and build the 2023 Pacific Games Stadium.

He assured the Chairman of the NHA that the new world-class national Stadium for the 2023 Pacific Games will be ready for use by January 2023. This will ensure Solomon Island athletes have the opportunity to practice on and use the new stadium prior to the start of the 2023 Games.

The MOU signing was witnessed by senior officials from both governments, including Dr. Jimmie Rodgers, Secretary to the Prime Minister and Chair of the National Hosting Authority for PG2023, other representatives from the Office of the Prime Minister and Cabinet, Ministry of Finance and Treasury and Oliver Liao, Deputy Chief of Mission and Minister at the R.O.C.(Taiwan) Embassy and other officials from the R.O.C.(Taiwan) Embassy.

Fu Tsu Construction company Ltd is a well-established and licensed general contractor in the Republic of China, Taiwan ("Taiwan").