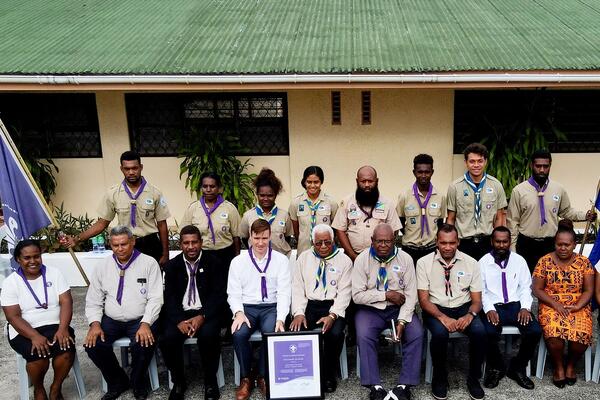 This announcement which was made at the 42nd World Scout Conference that ended in Dubai hosted from GENEVA yesterday 30 August 2021. It was greeted with joy and celebrations in Honiara despite the lockdown.

“This is a special day for us as we become the newest member of the WOSM,” said SISA Chairman, William Barile.

“We have worked tirelessly to achieve this ultimate goal that is to become independent from the United Kingdom Scout Association,” he said.

Oge was one of the key members of SISA who worked so hard with the Asia-Pacific Scout Region in the past two years to ensure Solomon Islands got its independence from the UK in the last meeting.

“Today, we have achieved our that goal. It is a new dawn for us let’s move forward as a new born baby from here,” Oge said in Honiara this week.

Being independent, SISA can now deal directly with other members of WOSM and attend meetings as a full member.

“Our voice can be heard at the world platform. We now have an equal standing with the rest of our scout family to the services WOSM offers,” said Oge.

SISA was founded in Tangarare in 1928, 94 years ago by a Roman Catholic Priest. It had then spread throughout the country during the colonial days and post independence.

Moves to achieve WOSM membership began as early as 2007 and finally it was granted this week.

In achieving independence, Oge pays tribute to the UKSA which had been the custodian of the SISA for the past 94 years.

“I would like to thank UK for their support towards us in the past years and supporting us to get our independence from WOSM.

“I am so grateful to them for guiding us to achieving independence,” he said.

Oge also paid honor to the Asia Pacific Regional Scout Office in Manilla for the support it rendered to SISA along the process to attaining membership with WOSM.

“They have been with us since day one and we are so grateful for their support,” he said.

Oge thanked the British High Commission in Honiara who has been very supportive of SISA in the past. He said their support has been huge and they too contributed significantly to this achievement.

“I would like to thank them especially the current high commissioner Dr Brian Jones who has been one of our biggest supporters since his appointment here.”

Solomon Islands Scout Association was represented by six [6 ] Youth Delegates and eight [ 8 ] Leaders and Observers of the Organisation for the Virtual Conference which began on the 18th of this month and ended Monday 30th August 2021.

Meanwhile, SI Scout Association would like to thank the following who have contributed significantly to enable SI Scouts Associations to participate in this first World Scout Conference.