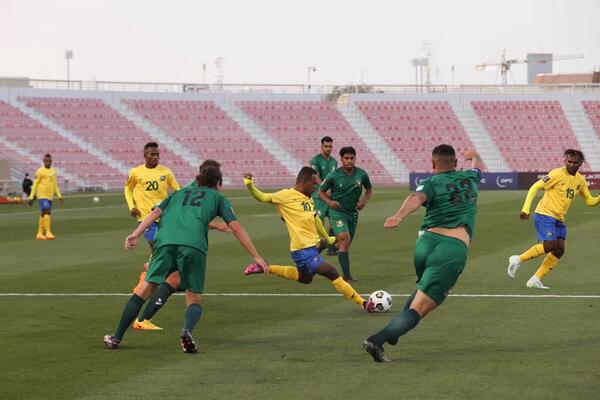 The FIFA World Cup Qatar 2022 Oceania Qualifiers are underway in Doha, with the Solomon Islands beating the Cook Islands by 2-0. First half goals by Atkin Kaua and Alvin Hou were enough to seal victory, as international football made a welcome return to the OFC.

The game kicked off in blustery conditions at Grand Hamad Stadium, with a strong breeze at the back of the Solomon Islanders. They dominated possession from the start, with the Cooks employing a deep holding defence in an effort to frustrate.

However, it was the Cooks that eventually got the first shot on target against the run of play, Grover Harmon driving a right footed strike low just inside the box that was collected by Solomons goalkeeper Phillip Mango. Not long after William Komasi had a chance for the Solomons with a free kick about 30 metres out from goal, but his ambitious shot went flying over the crossbar.

From there the Solomons lifted, opening the scoring in the 20th minute after some lovely work by Raphael Lea’i down the right-hand side. His low cross was mis-hit by Joses Nawo, but the deflection fell straight at the feet of Kaua. The midfielder took a touch near the penalty spot and sent the ball past goalkeeper Tahiri Elikana to make it 1-0.

It should have been 2-0 in the 37th minute, when another incisive pass into the box by Solomons captain Micah Lea’alafa found Hou unmarked in front of goal, but his shot went high. An even closer chance was missed by Nawo a couple of minutes later, with his effort bravely defended by Harlem Simiona. It took till just before the break for the Solomons to add to their lead, with Hou finding the target with a strike from just outside the box that curled past the diving Elikana.

Whatever was said in the Cook Islands changing rooms at half time had an immediate effect, as they went agonisingly close to pulling back a goal just after the restart. Ben Mata connected with a cross and headed the ball to a waiting Grover Harmon, whose shot was brilliantly saved by Mango. The resulting corner saw Mata just miss with another header on goal, with the captain smacking the pitch in frustration after the ball had been cleared.

That ended up being the closest the Cooks got to getting on the scoresheet. Both sides began ringing the changes on the hour mark, Gagame Feni was introduced for the impressive Lea’i, who had been at the heart of the Solomons’ attack all night.

Cooks coach Alan Taylor sent on Lee Harmon to join brother Grover in the midfield not long after, but possession dried up as the Solomons looked to add to their lead.

The rest of the game saw the Cooks once again having to defend for the majority, but no further damage was done to the scoreline as the Solomons side seemed to have issues playing into the stiff breeze. Simiona and Mata can hold their heads up after solid performances, their side has come in with little preparation and were clear underdogs for this fixture.

Solomons coach Felipe Vega-Arango has asked his side pre match to “work really hard”, and looked the sharper outfit having clearly benefited from a decent warm up campaign in Australia before traveling to Qatar. Still though, this was their first international match in over two years and played in tricky conditions, so it will be a pleasing performance for fans back home. They face Vanuatu on match day 2, while the Cook Islands meet Tahiti.