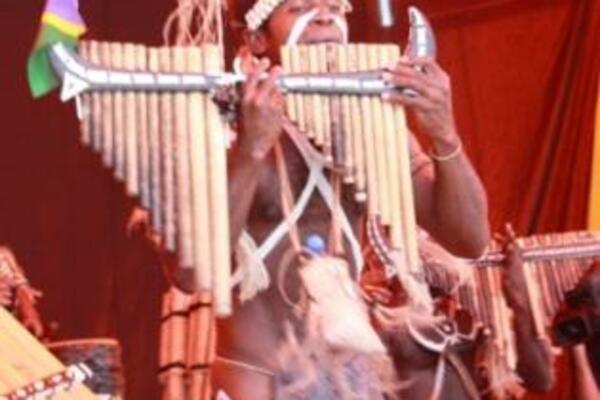 The Solomon Islands contingent to the recent 4th Melanesian Arts Festival in New Caledonia has done pride to the country when they topped the Cultural Arts and Performance category during the Festival.

Head of delegation and Deputy Director of the Culture Division, Denis Marita said Festival organizers were thrilled with the different spectacular forms of dances, pan pipes, music and the country's art and crafts which went on exhibition around New Caledonia during the two weeks event.

The outstanding result was an outcome of the local organizing committee, who made every effort to send a 76-member delegation to the Festival despite financial restrictions encountered by government.

Pan Pipe music and dance by the crowd dazzling Toelegu and Iare groups from Isabel and Makira provinces stood out of the rest for the uniqueness of the bamboo pipe sounds in Melanesia.

As a result Toelegu has been requested to perform live on stage alongside bands from New Caledonia, particularly the Kane jazz band of Noumea when they toured the Northern Province.

The impact of the creative blend of Jazz, Kaneka and pan pipes has drawn Kane jazz band managers' interest to propose a recording deal with Toelegu in New Caledonia anytime soon.

In a similar fashion, the 241 band featuring Hi'ona, which performed contemporary ethnic music blended with unique pan pipes from Are'Are has attracted crowds throughout the Festival.

The group has been requested on various occasions to perform alongside bands from New Caledonia and Fiji during their tour in the North. The most notable bands including the Liberal and Zavi Jilo of New Caledonia have shown interest in pan pipes for future recordings.

When the festival officially ended, the famous Sharzy and Paeva maintained their fame when they rocked a crowd of more 30,000 people at Tjibaou Cultural Center in Noumea on Thursday and Friday last week.

On expressive Arts and Crafts, the country's artists including painters, carvers, weavers and shell money makers have raised the arts and crafts profile of Solomon Islands when their work went on exhibition around New Caledonia during the two weeks event.

As the festival entered its second day in the Northern town of Kone, Solomon Islands arts and craft products went on sale like hot cakes. In all towns that our artists and craftsmen and women have toured, their exhibitions and sales have attracted huge crowds, particularly tourists and craft-shop owners.

In Noumea, overseas tourists were the major buyers of Solomon Islands arts and crafts.

The only event that Solomon Islands did not participate in was traditional cooking and food demonstrations.

Only hosts New Caledonia, Fiji and Vanuatu have participated in the food fare.

Mr Marita said the outstanding result of the 4th Melanesian Arts Festival contingent should be recognized by the National Government to increase the budget for preservation and promotion of our unique cultures which are at risk of extinction.

He said our cultures expressed through songs, dance, paintings, crafts are crucial for tourism if the government wish to develop our tourism industry.

"The way our crafts and paintings have been sold like hot-cakes at the recent festival demonstrates that our artists and craftsmen and women have the potential to raise the local crafts market in our tourism industry," Mr Marita said.

In terms of performance, Mr Marita said it is encouraging that many of our cultural performers are young people who have shown interest in preserving our unique dances and pan pipes.

He said pan pipe music and dance has been recently regarded as the icon of Solomon Islands overseas.

"It is important that government recognized this important form of traditional music which can be promoted for tourism entertainment or even the production of audio visual products," Marita explained.

The contingent has returned to country early Sunday morning with fresh and fond memories of the festival.