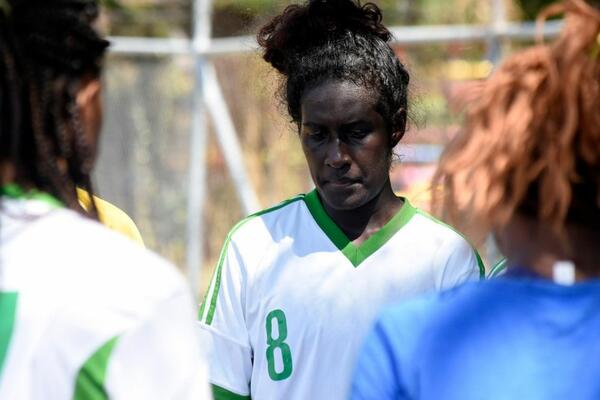 “Well I am hoping to make my name in the region like my brother as I am following in his footsteps," Ragomo said.
Source: Supplied
Share
Friday, 24 August 2018 07:31 AM

The name Ragomo is synonymous with one of the region’s most recognizable futsal stars – Elliot – but the 27-year-old isn’t the only family member with regional dominance on the agenda.

Serah, the younger sister of the 2016 OFC Futsal Championship Golden Ball winner, is eager to step out of her brother’s shadow and into a spotlight of her own on the Oceania football scene.

The 24-year-old who has previously played for the Solomon Islands women’s futsal team is making the switch to 11-a-side as part of coach Diane Justus’ squad for the OFC Women’s Nations Cup Qualifier in Fiji.

“Well I am hoping to make my name in the region like my brother as I am following in his footsteps, Ragomo said.

“I am so excited to be part of this team as I have played alongside most of these players before.”

Three years ago she was chasing her dream of becoming a professional futsal player and although it hasn’t panned out exactly as she would have liked, Ragomo is looking forward to pulling on the Solomon Islands jersey once more.

The versatile and talented footballer is comfortable in both midfield and defence, and will be a key player for Justus thanks to her background in futsal.

“Futsal helps with football quite a lot,” Ragomo stated.

“Everybody thinks it’s all about making you control the ball better but it’s also about being more aware, more comfortable on the ball and making better decisions.

“It helps because it’s really fast and the area is much smaller so when I came back to football, I was more comfortable to get the ball from throw-ins, in tight areas, and I felt like I had way more space when I got on a bigger pitch again.”

Without a doubt, futsal is Ragomo’s first love, but she’s looking forward to switching things up.

“I want to play for my country in football. It’s difficult but I’m sure it’ll happen. Of course I’m going to be upset if it doesn’t happen and I don’t get to play here in Fiji, but that’s a risk I’m willing to take.

“I prefer playing futsal but for sure I will pass all my futsal skills to the football side in these qualifiers.”