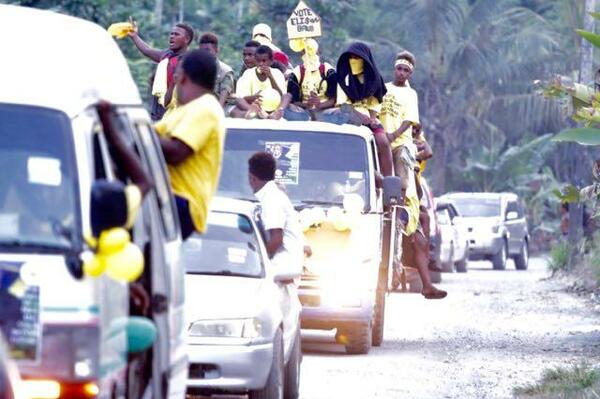 Crowded campaign rallies and long float parades have been going all weekend with boisterous political supporters decked out in party colours, waving banners and voicing their approval for their chosen election candidate.
Source: radionz.co.nz
Share
Monday, 01 April 2019 07:20 AM

Today is the last day of campaigning in Solomon Islands ahead of the National General Election on Wednesday 3rd of April.

It is the country's first since the departure of the Regional Assistance Mission to Solomon Islands almost two years ago.

The mission, which started in 2003, brought an end to a bloody ethnic conflict that left over 200 people dead or missing, tens of thousands displaced and the national economy crippled.

Fast forward two decades and post-conflict Solomon Islands is preparing for the biggest test of its security and stability so far.

Crowded campaign rallies and long float parades have been going all weekend with boisterous political supporters decked out in party colours, waving banners and voicing their approval for their chosen election candidate.

There are 50 parliamentary seats are up for grabs in the first-past-the-post race and stiff competition between cash strapped incumbent MPs promising continuity and everyone else promising change.

Jerrlim Laufilu and many others I spoke to said they wanted better leaders. But in Solomon Islands politics a "good leader" does not necessarily mean a good lawmaker.

"A person who will take care of us when we go for education to school next year to help with school fees. I want, if the person I vote for wins, I hope changes will take place in my community."

The reason both Daisy and Esther before her, are seeking direct benefits from their Member of Parliament is because of something called the Constituency Development Funds, more commonly referred to as CDFs, over which MPs have full discretion.

According to investigative research from Transparency Solomon Islands, since 2010 MPs have spent more than $SBD2 billion worth of tax payers' money through the secretive funds, earning themselves the nickname "ATMs". The majority of the spending is unaccounted for.

Transparency Solomon Islands' chief executive Ruth Liloqula said it has been almost two decades since the fund was first introduced and MPs have conditioned voters to be mentally and physically dependent on them for their personal wellbeing and community development.

"This is how they have mentored us this is how the members of parliament have got our people to, to thing just that very small and this thing has started since 2000 we are in 2019 now. Nineteen years of it what do you expect?" Ruth Liloqula said.

"And they have conditioned the people through this CDF to think small we never had that previously."

There are 1600 local police and corrections personnel involved the massive security operation for the election with logistical support being provided by 550 defence force personnel and transport assets from Australia and New Zealand.

The police commissioner Matthew Varley said his men and women are ready for any eventualities and he is calling on all Solomon Islanders to make the 2019 General Election a free and safe one.

"The world is watching this election and I don't think we should lose sight of that. This is our opportunity to show the world that Solomon Islands is a peaceful progressive country of the future. And one that can take its steps towards a better for its country with peace and with security," Matthew Varley said.

There are several international observer groups in the country for the election including from the Commonwealth, the Melanesian Spearhead Group and the Pacific Islands Forum.

The chairperson of the Commonwealth Observers Group, and former Vanuatu prime minister, Sato Kilman, said he hopes the Solomon Islands election goes smoothly and that people benefit from the results.

"The government, the electoral commission [and] the populace has done a lot of work to try and make sure that this election is fair and that people of the Solomon Islands can benefit from [it].

"And this is I think everyone's hope and we are here to try and assist and make sure that the elections are run fairly and if not then we will report our findings to the electoral commission and to the relevant authorities," said Sato Kilman.

And if they do their job properly there should be a fair bit to report because police are already having to deal with rogue political groups going around threatening voters with violence if they do not support particular candidates.

Also corrupt election candidates in the country are adapting to its strict new electoral laws and coming up with some innovative ideas in the process.

Last week the Solomon Islands Electoral Commission warned election candidates that it was an offence to charter ships or organise transportation to get their own supporters to and from the polls.

Out of constituency voting is non-existent in Solomon Islands so it is common practice for wealthy election candidates contesting provincial seats to charter whole ships to get their supporters to and from the polls.

But because of the new laws party affiliated candidates are getting business associates and family members to charter ships on their behalf.

Independents are having supporters collect cash from agents at random spots around town so at the ticketing offices they can appear to be paying for their own fare to go and vote.

But the most disturbing practice is voters being smuggled out of the capital, boarding ships from inlets, hidden coves and log ponds outside of the capital and away from prying eyes.

The last practice also raises safety concerns as the smuggler's boats, which reportedly depart in the dead of night, are not being monitored for overloading.

Local police are aware of the reports and are investigating.