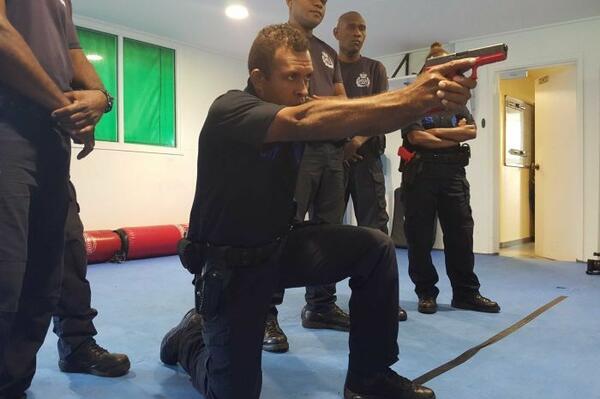 The small number of officers who will have access to guns have been training with replicas so they become familiar with weapons handling procedures.
Source: Photo supplied
Share
Wednesday, 28 September 2016 10:12 AM

Police in the Solomon Islands are preparing to carry guns, a key milestone before they take back full responsibility for law and order in their country from Australia.

Officers have been training to use firearms for the first time since an Australian-led intervention to stop armed conflict in the country in 2003.

Royal Solomon Islands Police Force (RSIPF) commissioner Frank Prendergast said the move was a key one, as Australian police prepare to leave the islands next year.

The process is being described as a "limited rearmament".

Specially-trained officers who respond to gun crime and riots will have access to weapons, while police who protect high-level officials and the Honiara International Airport will carry guns on duty.

"We're talking about rearming a very limited number of units inside the RSIPF," Mr Prendergast said.

"The units we're talking about specifically are our police response team, which is our high-level tactical team as well as our close personal protection team, which is responsible for providing security to visiting VIPs."

The small number of officers who will have access to guns have been training with replicas so they become familiar with weapons handling procedures.

The officers will be the first from the RSIPF to carry guns since Australian soldiers and police led an armed mission to quell civil unrest on the islands in 2003.

The Regional Assistance Mission to the Solomon Islands (RAMSI) disarmed the groups fighting over land and other issues, but it also needed to disarm the police because they were implicated in some of the violence.

Police have been conducting extensive community consultation about the rearmament process, but Transparency Solomon Islands' Ruth Liloqula said many people remained uneasy about the prospect of officers getting guns again.

"I don't think it's the right time or that the police are mature enough or in the right state of mind to be rearmed at this time," she said.

In the 13 years since the tensions, many of the old police officers have been replaced by new recruits.

Those recruits have been trained by foreign police, and officers now have other weapons, like batons and OC (pepper) spray, with which to subdue crowds and criminals.

The RSPIF have also been given a new armoury, with a range of protective mechanisms and processes, in which to store their new weapons.

Superintendent Stanley Riolo said it was far better than the previous armoury, which was raided during the civil unrest.

"Compared to what we had in the past, I think this is the most secure equipment that we have," he said.

The firearms will not be issued until the Solomon Islands Cabinet decides police are ready.

But it is likely to happen before Australian officers leave the islands in the middle of next year, ending the long RAMSI mission.