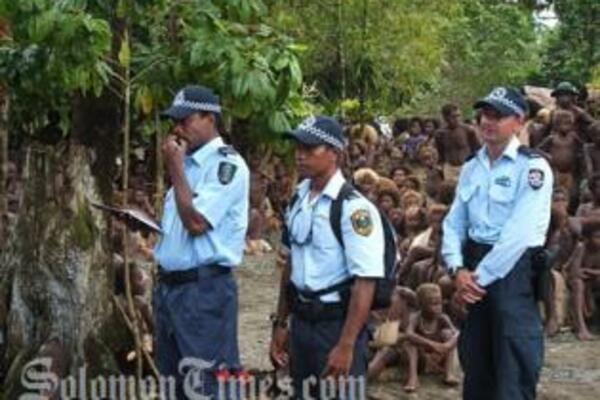 Many in rural Solomon Islands are reportedly not happy with the gradual handover of policing from RAMSI to the RSIPF.
Source: Photo Supplied
Share
Wednesday, 28 September 2011 08:19 AM

The Royal Solomon Islands Police Force (RSIPF) is calling on people along the country's Weathercoast to remain calm as policing responsibility in the region changes.

At the end of the week the RSIPF will take over the responsibility for law and order in the area from the Regional Assistance Mission, RAMSI.

But overnight, one of the police posts at the Weathercoast which will be closed after the changeover was attacked by rock throwing locals.

They say that as one of the areas worst affected by militant activity during the years of ethnic conflict, tensions remain and a strong police presence is needed.

However, the Deputy Commissioner of the Solomon Islands Police, Eddie Sikua, says the weekend's stoning of the police post is not linked to this week's planned withdrawal from Isuna post.

Mr Sikua says over the past two years the community has been consulted about the closing of the post and he "doesn't believe there is any ill-feeling resulting from the withdrawal."

He says there's been little crime in the area in the last few months and he doesn't expect any unrest at the conclusion of the handover.

Many in rural Solomon Islands are reportedly not happy with the gradual handover of policing from RAMSI to the RSIPF.