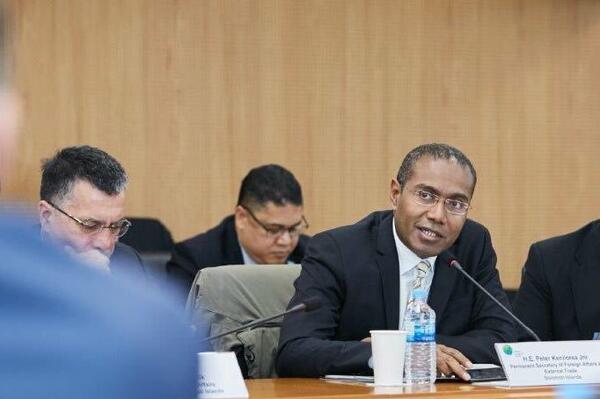 “I’m concerned about readiness in terms of our own governance, to really be on terms with China,” Mr Kenilorea said.
Source: File: ABC
Share
Tuesday, 28 May 2019 10:06 AM

First term MP for East Are Are and former Permanent Secretary for the Ministry of Foreign Affairs, Peter Kenilorea Jr, says Solomon Islands are not ready for a switch in recognition to mainland China.

Mr Kenilorea told The Australian that the economic advantages of aligning with Beijing were clear, but he feared his country’s institutions were not ready to deal with a “powerful and dominant China.”

“I’m concerned about readiness in terms of our own governance, to really be on terms with China,” Mr Kenilorea said.

“We need to strengthen those governance systems … knowing full well our strategic location in the Pacific, and the strategic resources that we do have.”

Australian Prime Minister Scott Morrison will visit the Solomon Islands on Sunday. This being his first international visit after his victory at the federal elections bodes well with his intention to make the Pacific front and center of Australia's strategic outlook.

Mr Kenilorea told The Australian that he hoped to meet Mr Morrison, who arrives in the country on Sunday, to express his support for Australia’s role as the Solomons’ “traditional partner.”

“China is the Solomon Islands’ largest trading partner, and this is adding a lot of pressure on lawmakers to switch allegiances,” said Jonathan Pryke, Pacific Islands program director at the Lowy Institute think tank.

The Solomon Islands is one of a handful of Pacific countries to recognize Taiwan, a policy now in question after recent elections. China views Taiwan as a renegade province with no right to state-to-state ties.