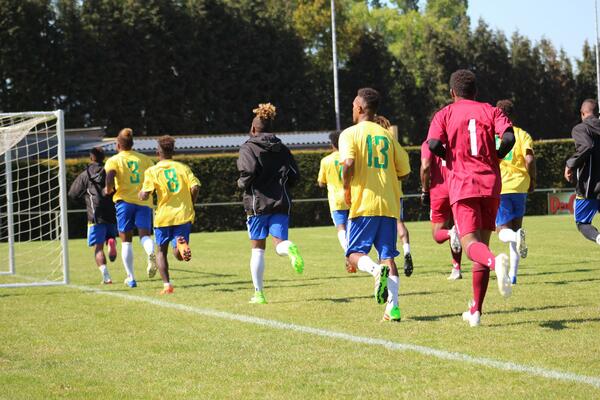 The squad has started their training session, under the watchful eye of coach Rijsbergen and his assistant Patrick Miniti.
Source: Netherlands Oceania Support Foundation
Share
Friday, 17 May 2019 10:43 AM

The Solomon Islands national soccer team landed in Amsterdam yesterday ahead of their three-week training camp.

Together, with renowned coach Wim Rijsbergen and Jan van Deinsen, the squad is preparing for the 2019 Pacific Games.

The specialized training camp has been organized by Paul and Koen of the Netherlands Oceania Support Foundation. Stepping into an unfamiliar environment, literally on the other side of the World, is something unique for these players.

The squad has started their training session, under the watchful eye of coach Rijsbergen and his assistant Patrick Miniti.

Coach Rijsbergen has set an ambitious target for the squad – win Gold at the upcoming Pacific Games in Apia, Samoa. The Gold medal has eluded the Solomon Islands national team for some time, a win would be historic, one that would be appreciated by the public – would be good for soccer and good for nation building.

Overseas based players such as Benjamin Totori will join the camp over the weekend.

Coach Rijsbergen had hoped that the hugely promising U17 player Raphael Laea’i would join the national team, but this was not possible because of school commitments at the Scotts College in New Zealand.

Raphael Lea’i and compatriot Leon Kofana enrolled at Scots College on a two-year scholarship and an opportunity to train with the Wellington Phoenix.

The school said that in terms of their football development, both Rafa and Leon are training once a week with the Wellington Phoenix and three times a week with Scots College 1st XI and academy.

“We are looking to provide them with an additional Wellington Phoenix training session per week later this term. They will be well prepared for the U17 FIFA World Cup later in the year,” Scots College Dean International Students Marc Capstick says.