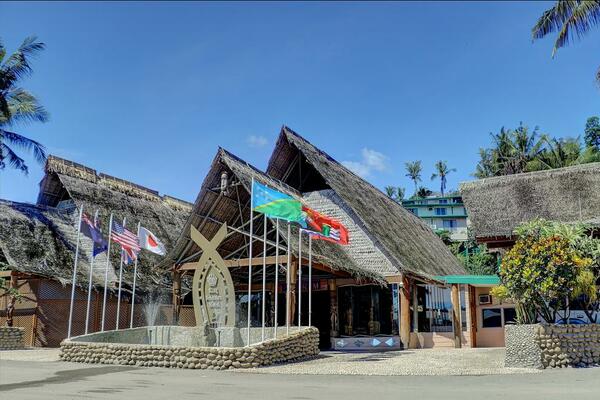 Shane Kennedy was the owner of the King Solomon Hotel in Honiara and the Gizo Hotel in Gizo in the Western Province.
Source: bookings.com
Share
Monday, 26 August 2019 09:37 AM

The close-knit Solomon Islands travel community is in mourning following the death of larger than life tourism pioneer Shane Kennedy who passed away in Brisbane on Friday.

As the owner of the King Solomon Hotel in Honiara and the Gizo Hotel in Gizo in the Western Province, Mr Kennedy was prominent on the tourism scene and actively involved with communities in both areas.

A North Stradbroke Islander, Mr Kennedy and wife Suzie first become involved with the Solomon Islands when they bought the King Solomon Hotel in 2002.

The island became famous during WWII when Mr Kennedy’s more high-profile namesake, then 25-year-old Naval Lieutenant, John F. Kennedy, later to become the 35h president of the United States, swam to shore with the surviving members of his crew after their vessel, PT-1 was rammed and sunk by a Japanese destroyer during the infamous Guadalcanal campaign.

Today known as Kennedy Island the small speck of sand, bushes and trees has become an international drawcard, particularly for US visitors.

Further cementing the Kennedy name in the Western Province, Shane’s brother Dan joined him on the local tourism scene when he purchased the iconic Fatboys Resort.

Offering his condolences to the Kennedy family, Tourism Solomons CEO, Josefa ‘Jo’ Tuamoto thanked Mr Kennedy for the huge contribution he made to the Solomon Islands tourism sector.

“We are deeply saddened by the news of Shane’s passing,” Mr Tuamoto said.

“He was a truly larger than life character who worked incredibly hard with and for the local community and in the process, made a huge difference to many people’s lives as a major employer.

“He will always be remembered for the success he achieved in placing the Solomon Islands and particularly Gizo on the world tourism map.

“His leaves behind a wonderful legacy.

“I am sure Shane would have said himself, the most important thing is to give your best on the day and he most certainly did that.”

Mr Kennedy leaves behind his wife Suzie, son Shamus and daughter Ngaio May.

Friends and colleagues wishing to on pass their condolences can do so via the following email addresses - shaneandsue@gmail.com and starddielady@gmail.com.