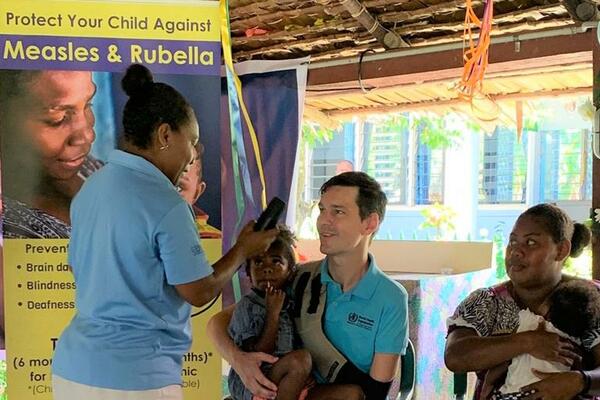 An intensive measles and rubella vaccination campaign is currently underway in Solomon Islands with the aim of immunising 90,000 children in communities across the country.

The Ministry of Health and Medical Services, with the support of the World Health Organization (WHO), GAVI and UNICEF, is running the “supplementation” campaign to ensure every eligible child is fully protected against the potentially deadly disease. The campaign was launched in Honiara by the Minister of Health, the Hon. Dickson Mua.

The Ministry is calling on all parents with children aged from six months to five years, 11 months to bring their children to clinics and vaccination posts set up around the country. Over the next four weeks, health workers and vaccination teams will be visiting villages, while posters, leaflets and banners will also help to alert people to the campaign.

Measles is a highly contagious viral disease that can cause blindness, encephalitis - an infection that causes brain swelling - severe diarrhoea and dehydration, and severe respiratory infections such as pneumonia. There is no treatment for measles and the only way to prevent it is to vaccinate.

Measles is transmitted via droplets from the nose, mouth or throat of infected persons. Initial symptoms, which usually appear 10–12 days after infection, include high fever, a runny nose, bloodshot eyes, and tiny white spots on the inside of the mouth. Several days later, a rash develops, starting on the face and upper neck and gradually spreading downwards.

The measles virus will infect anyone who is not protected. Nine out of 10 unvaccinated people exposed to measles gets sick. One person infected with measles can give it to 12 others - this is why outbreaks spread so quickly. The campaign is timely, given recent measles outbreaks around the Pacific, including in New Zealand, Australia and now possibly Samoa.

With many countries in the Western Pacific affected, there is a risk of an outbreak in Solomon Islands, Permanent Secretary for Health Mrs Pauline McNeil said. “We remember the measles outbreak in 2014, which took the lives of nine Solomon Islanders and resulted in more than 4,600 cases throughout the country. The best and safest way to protect our children from this disease is to immunise them.”

Rubella is also covered in the vaccine being distributed by the Ministry. Rubella is a leading cause of birth defects if contracted by mothers during early stages of pregnancy. An unvaccinated pregnant woman infected by rubella during her first trimester has up to a 90% chance of giving birth to a baby with birth defects, including heart disorders, blindness, deafness or brain damage.

Mr Tony Foulkes Health Systems Co-ordinator from the WHO Solomon Islands Country Office, congratulated the Ministry on the campaign, and on its commitment to improving the health of Solomon Islands children. “Routine measles vaccination for children, combined with mass immunization campaigns in countries with low routine coverage, are key public health strategies to reduce global measles deaths.

“WHO congratulates the Ministry on this potentially life-saving campaign and we acknowledge the efforts of all those who worked hard in its preparation - development partners UNICEF and GAVI, but most especially, health workers and vaccination teams who are in the frontline in the fight against measles and rubella.”