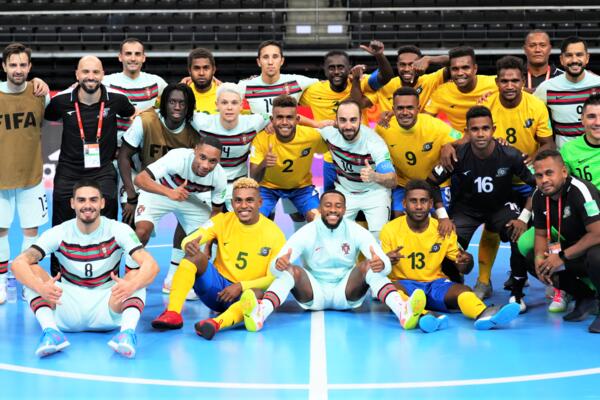 It is not the result the Solomon Islands Kurukuru wanted, but it was a huge ask from the get go. Portugal, ranked 6th in the World, was with its star player, the five-time Best Player in the World award winner Ricardinho Filipe da Silva Braga.

Coming off a loss to newcomers Morocco, Solomon Islands had to regroup as they took on one of the tournament favorites, Portugal, who finished 4th in Colombia five years ago.

Portugal piled the pressure from the start, and took an early lead through a well-executed offensive play. Solomon Islands attacked from the side, Osifelo delivered a fantastic shot from outside but was saved by the keeper. Captain Elliot Ragomo’s shot from the corner took a deflection but was denied by the post.

Portugal attacked and Ricardinho scored from a well-placed corner ball. Andre scored shortly after, hitting the ball on the volley, one of the best goals of the tournament so far. Andre scored again from a counter attack, catching the Solomon Islands keeper off guard.

The second half saw the Portuguese score four quick goals in succession, capping off a comprehensive win, and guaranteeing they progress to the knockout stage. The match ended 7-0 in favor of Portugal.

Despite the loss Solomon Islands finished the match with smiles on their faces, knowing that they were beaten by a better team, one of the best in the World.

“We’re very proud to play on the greatest stage in futsal and compete with the best teams in the world. I think we’ve learned a lot,” said Solomon Islands captain Elliot Ragomo.

Despite the loss and an early exit from the World Cup, Kurukuru has one more game against Thailand, and will be keen to walk away with a win registered.