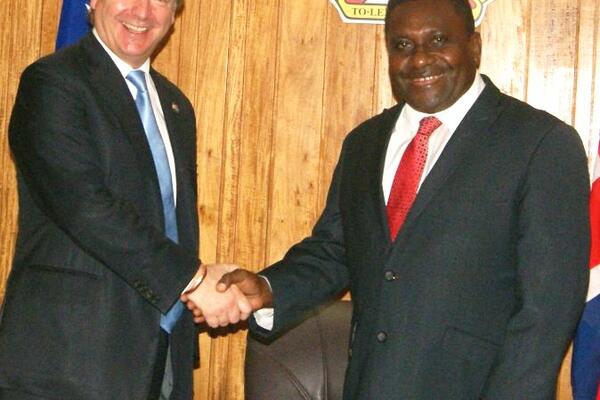 Solomon Islands are keen to bolster its relationship with Great Britain after 35 years of Independence.

Prime Minister Gordon Darcy Lilo made the announcement during a meeting with Britain’s Minister of State Mr Hugo Swire in Honiara, saying the Government is considering opening a High Commission Office in London.

During the meeting Prime Minister Lilo assured Britain of the government’s commitment to rejuvenate its relationship with London.

“To revitalize the relationship with Britain, my Government, is considering the possibility of opening a high commission in London and to stay closer to the Commonwealth,” Mr Lilo said.

In response, Mr. Swire has assured Prime Minister Lilo that Britain stands ready to support Solomon Islands of its intention to establish a mission in London.

He re-iterated that Solomon Islands and the Britain have a lot in common pointing to the Queen as the head of the two countries and both are members of the Commonwealth.

Meanwhile, Mr. Lilo said he was happy to see a British minister visiting the Solomon Islands exactly 10 years after the last visit of a minister from Great Britain.

He said unlike 10 years ago a lot has changed in the Solomon Islands and the economic outlook as predicted by the International Monetary Fund (IMF)) for this year is positive.

Mr. Swire is in the Solomons on his Pacific tour.