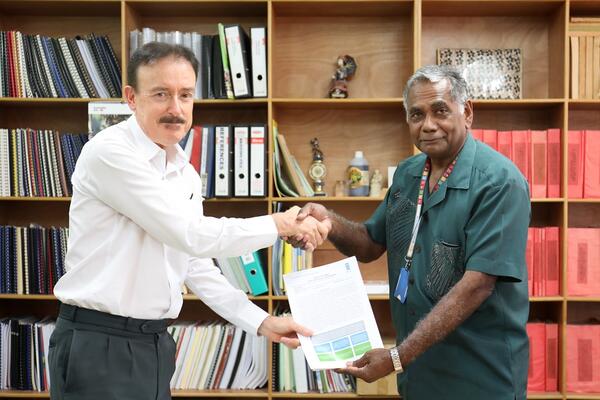 The agreement supports a four-year project aimed at addressing corruption and increasing transparency and accountability in government.

The project, co-financed and implemented by UNDP, aligns with Solomon Islands’ National Anti-Corruption Strategy which identifies corruption as a barrier to sustainable development, fair access to government services and economic opportunities in the country.

“Consultations and reflections on the way forward to promote integrity, transparency and accountability over the past years have led to a structured identification of our greatest strengths and weaknesses in this drive to stamp out corruption,” Secretary to the Prime Minister Dr. Jimmie Rodgers said.

“The project document signed with UNDP earlier this month reflects Solomon Islands’ commitment to combat corruption and opens opportunities for renewed partnership in this critical field.”

Solomon Islands is currently ranked in the middle range of most corruption-related indexes, including Transparency International’s Corruption Perception Index which ranks the nation 70th out of 180 countries.

The initial SIG-UNDP partnership agreement signed in 2017 under the National Anti-Corruption Strategy represented an SB$9 million government investment over three years. The new agreement represents an investment of around SB$5.24 million over four years.

The partnership progressed the national integrity framework, with the notable adoption and enactment of the Anti-Corruption Act and Whistleblowers Protection Act in 2018.

“To strengthen national initiatives that target increased transparency and accountability, it is essential for international counterparts to recognize recent achievements and the partnership with SIG,” Mr. Cameron said.

“UNDP and SIG would welcome support from our development partners to provide the remaining US$7 million of funding for this crucial project and ensure its success.”
The project is expected to begin later this year and continue through April 2023.