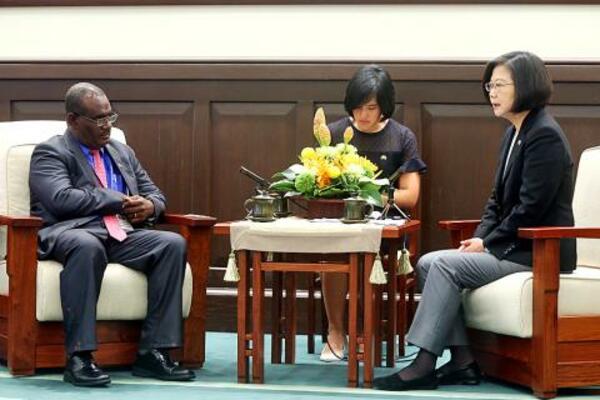 Taiwan and the Solomon Islands put on a display of friendship, pledging to deepen ties amid rumors that the Pacific nation ally might shift diplomatic recognition to Beijing.

President Tsai Ing-wen lauded the 36 years of diplomatic relations between the two nations, and thanked Honiara for its continuous support of Taiwan’s efforts to participate in UN agencies and related activities.

“Good friends should get together often, and Taiwan and the Solomon Islands are a perfect example of this spirit,” Tsai said, citing Solomon Islands Speaker of Parliament Patteson Oti’s participation in the annual gathering of the Asia-Pacific Parliamentarians’ Union in Taipei at the beginning of last month and a visa waiver agreement that was signed by Manele and Minister of Foreign Affairs Joseph Wu on the sidelines of the Pacific Islands Forum in Tuvalu in the middle of last month.

Tsai also mentioned a video produced by the Ministry of Foreign Affairs that tells the story of Solomon Islands doctor Paul Bosawai Popora, who studied in Taiwan and established a clinic in a rural area to help the poor in his nation.

Tsai added that she toured the Taiwan Health Center in the Solomon Islands National Referral Hospital during her 2017 visit to Honiara, where she received a briefing from Taiwan’s medical mission.

“Their work made one thing very clear to me: Taiwan is a responsible member of the international community and a partner willing to make contributions. This is more than just a slogan, it is what we are putting into practice every day,” she said.

Taiwan and the Solomon Islands are partners that support each other and share the values of freedom, democracy, human rights and combating climate change, as demonstrated over the past three years, when both countries benefited from projects in agriculture, medical services and human resources, she said.

She vowed to further promote bilateral relations and expressed the hope that Honiara would continue its support of Taiwan’s participation on the international stage.

Manele arrived on Sunday with a four-member delegation, including Permanent Secretary of Foreign Affairs Collin Beck, for a five-day visit, his first since becoming Foreign Minister in May.

The delegation last night were guest of honor at a banquet hosted by the Ministry of Foreign Affairs at the Taipei Guest House.

American Institute in Taiwan Director Brent Christensen was among the guests.

Before the banquet, Wu and Manele held a news conference, where Manele said the visa waiver agreement and Oti’s visit last month demonstrated the “active, friendly, rich and progressive relations” between the two nations.

Asked about reports in June that the Solomon Islands government would decide in 100 days whether to switch diplomatic allegiance to Beijing, Permanent Secretary Beck did not respond directly.

His government is examining broad diplomatic relations, and not just targeting Taiwan, he said.