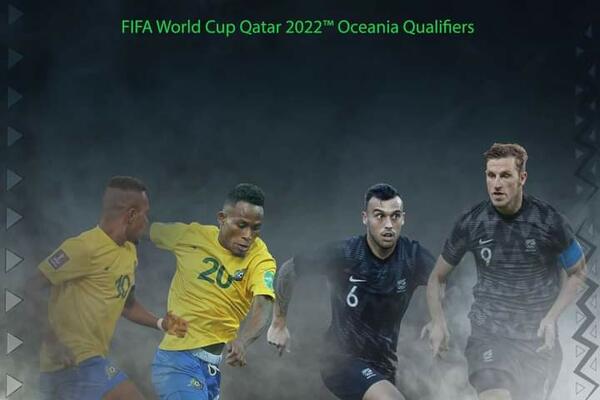 “New Zealand has professional players but it’s 90 minutes 11v11 on the field so I just want them to be competitive and if we are competitive, it won’t be easy for New Zealand to beat us and I hope the boys are ready,” coach Felipe said.
Source: Supplied
Share
Wednesday, 30 March 2022 09:24 AM

Solomon Islands national football team have a chance to create history when they take on Oceania heavyweights New Zealand in the FIFA World Cup 2022 Oceania Qualifiers final in Doha on Thursday 31st March 2022.

It will be in the early hours in Honiara and fans will get to witness a match of a lifetime, a youthful national team ready to do battle, a win would be for the history books for this football-mad nation.

The national team received praises from football fans home and abroad for their stellar performances in the group stage and a thrilling semi-final win against Melanesian wantoks Papua New Guinea to set up a rematch of the previous World Cup qualifiers with New Zealand five years ago.

On paper, the All Whites are the favourites having dominated Oceania football for the past decade after Australia joined the Asian Football Confederation (AFC) but Solomon Islands rejuvenated the belief after the national side’s recent performances in the World Cup qualifiers under the stewardship of Spaniard Felipe Vega-Arango who is not new to Solomons, having led the country to a final play-off during his interim role as a coach in 2017.

Felipe said the spirit in the Solomon Islands camp is high after the semi-finals against a strong Papua New Guinea side and he urged his players to treat the match as a once in a lifetime opportunity to create history.

"Well, I told the players that this kind of opportunity doesn’t come too often. This game is one time every four years,” he said.

The Spaniard stressed that everybody knows that New Zealand is a professional team but anything can happen in football on a given day.

“New Zealand has professional players but it’s 90 minutes 11v11 on the field so I just want them to be competitive and if we are competitive, it won’t be easy for New Zealand to beat us and I hope the boys are ready,” he added.

Solomon Islands as a country has gone through a lot of challenges such as a political crisis and is currently dealing with COVID-19 which denied the national team training for a few weeks due to lockdown and the national team coach is happy to see the team gives back something positive for the people to smile again and enjoy during a difficult moment.

“Well, we talked about that in the locker room today. Micah shared that with me too. I say to the players, boys you are powerful people right now because you are in a privileged situation. You can make a lot of people happy, and it’s not easy to have that kind of power,” Felipe said.

However, the national team coach is calling on the fans to understand that in any sport there has to be a winner and a loser. He calls on the supporters to enjoy the final as the lads will give it their all to compete for the country.

“But saying that this is a sport there is no tie; somebody loses, somebody wins,” Felipe added.

There are few injury concerns in the team as Raphael Lea’i picked up a minor knock in the semi-final but he is fully recovered to play the final. Lea’i is equal top of the scoring chart with 4 goals alongside New Zealand leading scorer Chris Wood.

Meanwhile, left-sided winger Alvin Hou is likely to miss the final after feeling a hamstring injury after the semi-final.

Captain Micah Lea’alafa said the team understands it will be a tough clash against New Zealand but he believes the team has what it takes to compete in the final.

“New Zealand is the team to beat looking at their squad but I believe if we do the right things on the field and play with the same mindset we can create a major upset,” the skipper said.

“The game will never happen again. I believe the boys will do everything and for myself, this could be my last international World Cup qualifiers and few other senior players.

“So, we will give everything for our country and I motivated the young generation of players to fight with us at least to create history together for our nation.”

Lea’alafa also wishes to thank the fans back home and overseas for rendering their support for the national team since their Australia tour and at the recent FIFA World Cup 2022 Oceania Qualifiers in Doha, Qatar.

The winner of the match between Solomon Islands and New Zealand will advance to play an inter-continental play-off match against the 4th place team from the Concacaf region, likely Costa Rica heading into the final rounds of World Cup qualifiers in North America this week.