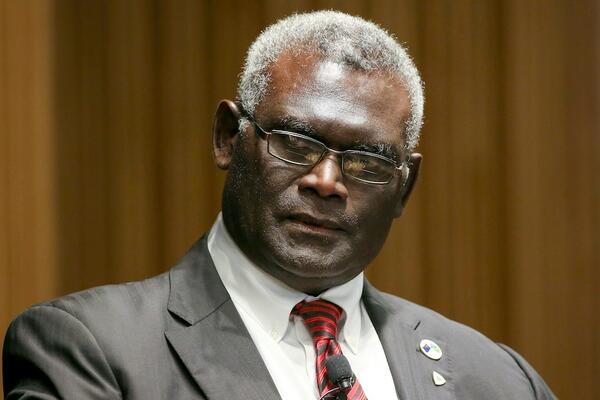 Mr Sogavare told parliament that vessels from Australia would be exempt due to its participation in a treaty.
Source: File
Share
Tuesday, 06 September 2022 08:20 AM

Navy vessels from Australia and New Zealand will be exempt from a temporary ban on foreign ships entering the ports of the Solomon Islands, Prime Minister Manasseh Sogavare told parliament yesterday.

Foreign military vessels responding to a request for assistance from the Solomon Islands government would also be exempt, Prime Minister Manasseh Sogavare said on Monday.

The Solomon Islands signed a security pact with China in April, which a leaked draft said allows the Chinese navy to replenish in Honiara.

It prompted concern from Australia, New Zealand and the United States about China's growing influence.

Last week, Mr Sogavare announced a moratorium on foreign navy vessels entering port following incidents in which a US coast guard vessel and a British navy vessel on patrol for illegal fishing were unable to refuel in Honiara.

Questioned by opposition members of parliament about the moratorium, Mr Sogavare said military vessels deployed under the auspices of the Solomon Islands International Assistance Force (SIIAF) — a treaty under which Australia, New Zealand and Fiji work with Solomon Islands police — would be exempt.

The US, which plans to open an embassy in Honiara, said it was informed on August 29 of a moratorium on all foreign navy vessels.

A month earlier, the US pledged to boost aid and increase illegal fishing surveillance in the Pacific in an attempt to counter China's growing presence.

He said Australia, New Zealand, the US and Britain had become involved in the illegal fishing patrols and his office needed to know more about the vessels arriving.

The Forum Fisheries Agency, which is based in Honiara and represents Pacific Island nations with rich tuna stocks, would need to notify his office about which naval vessels are taking part in surveillance patrols to gain an exemption, he said.

"We don't know who the hell is coming," he said.

Minister for Foreign Affairs Jeremiah Manele said a report on the matter was expected at the end of next week.

Tensions are high in Solomon Islands as changes to the constitution to delay a general election are expected to pass parliament this week.

Australia advised in a travel warning on Saturday of the risk of civil unrest as the parliament considers "significant legislation".