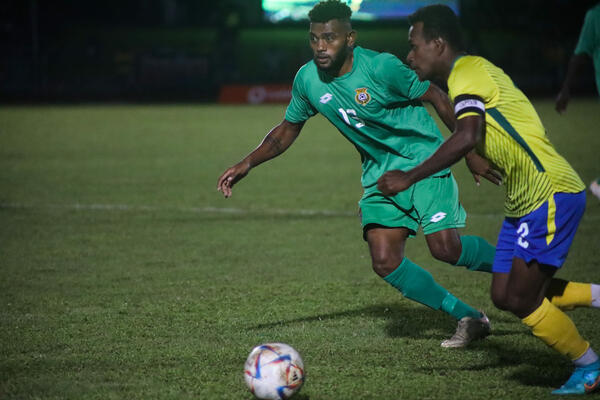 Vanuatu were down to 10 men when their defender was booked for a second time, and despite being one man up Solomon Islands were unable to penetrate Vanuatu’s defence.
Source: Supplied
By Jimmy Nolan
Share
Wednesday, 28 September 2022 09:43 AM

Solomon Islands has dropped out of the MSG Prime Ministers Cup, losing to the Vanuatu development team in a penalty shootout.

The game was played in front of a packed crowd at the Korman Stadium in Port Vila, Vanuatu.

Solomon Islands were on an unbeaten streak, the most recent was a 2-2 draw with Fiji.

The Vanuatu development team went into the game having lost to PNG 1-0 in their opening group match and later drew 2-2 with the Vanuatu national senior team.

The game was well contested, and although Solomon Islands had good possession they were not able to convert chances, with shots on goal low.

Close to midway in the first half a well timed cross was met by Raphael Lea'i putting the Solomon Islands up 1-0.

The game was not without controversy, a goal by Lea'i in the second half was ruled off side, with replays showing that he was in fact on side.

The Vanuatu development team took full advantage of the home crowd, with rapturous cheers when they were in control. The Vanuatu team caught the Solomon Islands off guard with a well-executed corner kick, drawing out the defence before chipping the ball back in for a header.

Vanuatu were down to 10 men when their defender was booked for a second time, and despite being one man up Solomon Islands were unable to penetrate Vanuatu’s defence.

The game went into penalty shootout and Solomon Islands lost 5-4.