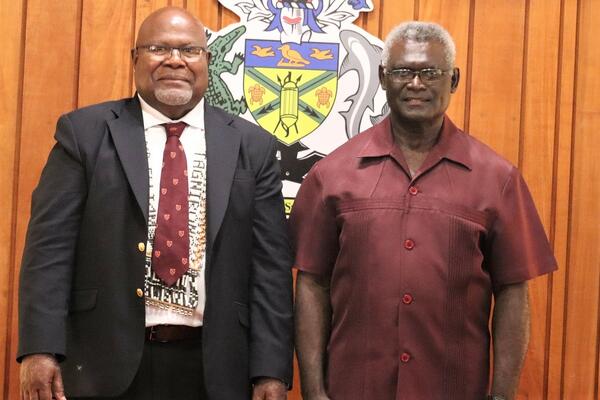 His Excellency Mr Eliam Tangirongo has been commissioned to take up his new role in New Zealand.

Prime Minister Manasseh Sogavare administered the Commissioning ceremony at the Office of the Prime Minister and Cabinet in the presence of senior Government Officials and Family members.

The Prime Minister reminded High Commissioner Tangirongo that his tasks as the new High Commissioner to New Zealand is first to represent and promote the interests of the Government of Solomon Islands in New Zealand. These tasks could be political, economic, social and cultural.

Sogavare further advised the High Commissioner not to compromise his official duties with personal interests and other forms of persuasions during his term in Office.

The Prime Minister also reminded the Commissioner the he is the link between Solomon Islands Government and the Government of the country to which he is accredited and that his office and home will be the safe haven for Solomon Islanders in times of need.

During his term in Office, High Commissioner Tangirongo was reminded that his instructions on all occasions during his mission will come from the Permanent Secretary of the Ministry of Foreign Affairs and External Trade and that he must avoid extravagance at all costs.

Prime Minister Sogavare is confident that His Excellency Tangirongo is eminently fit in his personal qualities and experience in the affairs of State for the charge the Government of Solomon Islands has entrusted on him.