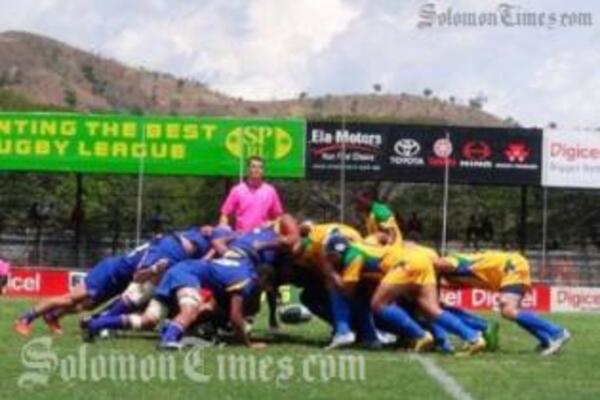 Solomon Islands will now meet PNG on Thursday, a true test for both teams.
Source: boxscorenews.com
Share
Wednesday, 30 November 2011 08:09 AM

The opening match of the Oceania Cup between Niue and Solomon Islands, under the searing Port Moresby sun, was a very close affair despite Niue having a clear weight advantage over their opponents.

The Solomon Islands seemed oblivious to this disadvantage as they lined up for the anthems and were equal to the task as the Niue forwards attempted to pummel them into submission, showing great tenacity in cutting down their opponents at every chance in the opening minutes.

Sustained pressure though did prove too much to withstand when Niue fly half Danny Atamu slipped through the Solomons' centres to score a 12th minute try. The conversion was unsuccessful, but Niue attempted to continue their onslaught through the middle with some bruising runs.

However, to their credit, the Solomon Islanders hung on to weather the Niue storm, stringing together some probing runs of their own on the flanks to frustrate a team who seemed to be struggling with the scorching heat.

In the 20th minute, having missed a penalty attempt, the Solomon Islands drew level when Captain Corey Chapman burrowed through the defence close to the line. Man of the match, second row Illisoni Delaiverata, touched down nine minutes later to send the Solomon Islands in leading 10-5.

Both teams came out firing in the second half with the Solomon Islanders seemingly the more conditioned and getting their reward when wing Patrick Marie touched down just before the hour mark.

Niue kept their hopes alive when replacement Manoa Lito touched down, but Delaiverata made certain of victory when he raced up field, eluding a number of Niue defenders and sold a dummy. Niue did have the final say with Lito's second try right on full-time, but it was the Solomon Islands left celebrating.