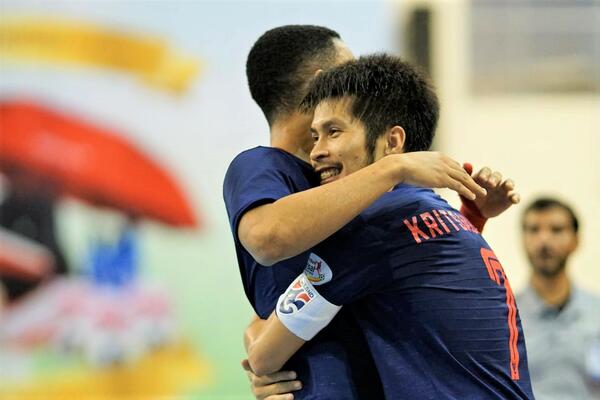 “Solomon Islands are a team which we can't afford to underestimate as they have players with great techniques."
Source: AFC
By Jimmy Nolan
Share
Tuesday, 07 September 2021 12:46 PM

As the FIFA World Cup in Lithuania nears, competing teams are making their assessment on their road to Futsal glory.

Thailand is looking at going beyond the group stage, and feels that this would be their chance to make Futsal history.

Thailand captain Kritsada Wongkaeo is a key figure, nine years back he featured prominently, scoring twice at the 2012 FIFA Futsal World Cup in Thailand, where his side stormed into the Round of 16 for the first time.

Four years later, the dynamic winger was on fire racking up another four goals in Colombia 2016, as Thailand again progressed to the second round, this time for the first time on foreign soil.

Pitted against European powerhouse Portugal, Morocco and Solomon Islands in Group C, he is well aware that their campaign will be challenging.

"We are in a tough group, of course,” commented Wongkaeo, who is Thailand's third all-time international scorer with 95 goals from 76 caps across a 12-year international career.

“Solomon Islands are a team which we can't afford to underestimate as they have players with great techniques.

“The two matches against Morocco and Solomon Islands will be the games where we can truly compete. We need to take points against both teams if we are to qualify for the next round,” Wongkaeo said.

Solomon Islands will fancy their chances as well, it just came out of a month-long camp, playing against some of the top club sides in Poland and Croatia.

Despite losing its key striker Raphael Lea’i to injury during the friendly matches, the team is banking on its experienced captain Elliot Ragomo to provide much needed leadership on the court.

Solomon Islands will open their campaign against Morocco on September 13, before tackling Portugal three days later, then Thailand on September 19.