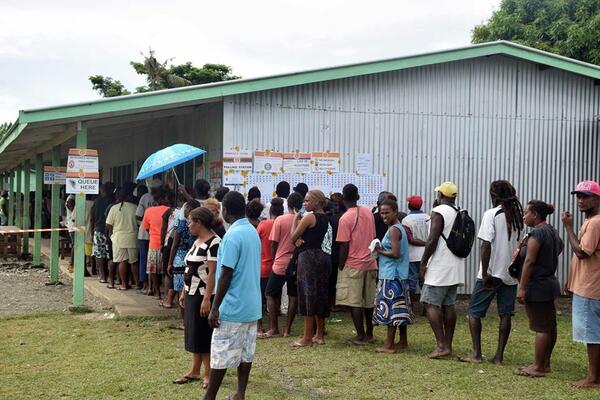 The turnout for the Solomon Islands National General Election was strong with some areas reporting 100 percent participation.
Source: RSIPF
Share
Thursday, 04 April 2019 07:15 AM

The first results of the Solomon Islands election are expected today as counting gets underway in the country.

All of the ballot boxes from yesterday's poll are being transported to central locations in the provincial capitals for counting. And counting for those areas closer to the capital begins today.

The turnout for the election was strong with some areas reporting 100 percent participation.

But this was marred by reports of some voters not being able to cast their votes because they were unable to locate their polling stations or had the wrong identification.

Speaking to the media after the polls closed last night, chief electoral officer Mose Saitala said it was sad that some were unable to cast their ballot yesterday.

But he said the commission did everything in its power to get people to double-check their details in the months leading up to the election.

"Well people have to learn the hard way. You have to wait for another four years. If your inability to exercise your right to vote this time was caused by our office inefficiency in terms of handling your registration, then I can only say that I regret that loss and we will take corrective actions to be able to rectify that," he said.

In his opening remarks last night Mr Saitala extended his thanks to everyone who took part in the election and congratulated Solomon Islanders on what he described as the most peaceful election the country has had in a long time.

Meanwhile, police in the Solomon Islands are closely monitoring reports that some groups are planning violent protests if the election candidate they support is unsuccessful.

In a statement last night assistant police commissioner Joseph Manelugu strongly warned anyone planning any unlawful activity in the days ahead to think again.

Mr Manelugu said police will do whatever is necessary to protect the people of Solomon Islands.

Police intelligence teams say they have identified the problem areas across the country and are mobilising resources in preparation for the worst.

The public is urged to assist the police with national security by reporting any real or potential threats within their communities so that the appropriate action can be taken.