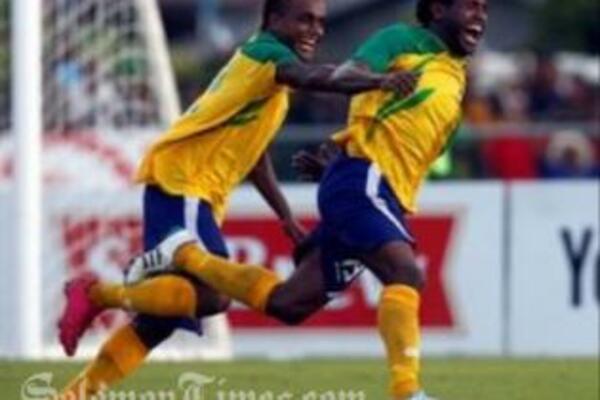 The Bonitos booked their passage from Group B with a historic 1-1 draw against New Zealand - a country they had never earned a positive result against - while Fiji will be returning home after also posting a 1-1 tie in a match against Papua New Guinea they needed to win to have any chance of progessing.

"This is a great result for us and it's good to create a piece of history," Solomon Islands coach Jacob Moli said. "But the draw today doesn't guarantee us anything yet, I just hope that come Friday we step up another gear."

With the All Whites' place in the semi-finals already assured, coach Ricki Herbert took the opportunity to rest some of his more battle-weary campaigners - regular starters Ben Sigmund, Michael McGlinchey, Shane Smeltz, Chris Killen and Ivan Vicelich did not even feature on the bench - and gave chances instead to the likes of Tim Myers, Ian Hogg, Michael Boxall and Tim Payne, all still finding their feet at international level.

As was the case in New Zealand's two prior matches, they took the lead early on when Leo Bertos picked out Chris Wood with a swerving cross for the big striker to chest down and beat goalkeeper Felix Ray Jnr with a low volley in the 13th minute. On a rare overcast day in Honiara, the All Whites for once avoided having to toil away in the sweltering heat but it soon became apparent that it would be far from a relaxing afternoon for Herbert.

Clearly lifting their game for the occasion, the Bonitos dominated their more highly-ranked opponents for long periods and carved out several chances to equalise before finally doing so just before the hour mark, Benjamin Totori cutting inside Myers and unleashing an unstoppable shot into the top corner to put the hosts in sight of a memorable result.

The same man very nearly snatched a win for the home side in the dying seconds when he fired a low effort across the face of goal but the All Whites could also have earned all three points after failing to take several good chances. The best of those fell to Payne, Rory Fallon and Chris Wood while Ray Jnr pulled off a spectacular save to deny substitute Adam McGeorge a first international goal late on.

"We exposed a new team today to a side that I think is the toughest in the competition," Herbert said. "I think there's some tired young ones going away having a good reflection about international football in the islands. They now know it's not easy but they've done us proud and retained that top spot which was important."

In the day's earlier match, everything seemed to be going to plan in Fiji's last-ditch attempt to make the top four when they took an early lead in the 13th minute, Papua New Guinea goalkeeper Leslie Kalai palming away an Alvin Singh header for striker Maciu Dunadamu to nod home the rebound.

With so long in the match still to play, Fiji must have thought they had every chance of going on to complete the win they needed to put pressure on Solomon Islands in the later game. But they could not breach a Papua New Guinea outfit well drilled by former Australia coach Frank Farina and, when another strike finally did arrive, it went to the side with little to play for after already being eliminated from the tournament.

Knowing anything less than a Fiji win would be enough for their beloved Bonitos to qualify, the thousands who had packed into Lawson Tama were right behind Papua New Guinea and greeted Kema Jack's headed 85th-minute equaliser with delirium.

"I thought we got better as the tournament wore on but unfortunately we ran out of games," Farina said. "In general, I'm very pleased with the team's performance after 10 years of not being in the Nations Cup."

Fiji counterpart Imdad Ali, standing in for the bed-ridden Juan Carlos Buzzetti, was disappointed to have exited World Cup qualifying at an earlier stage than the proud footballing nation would have hoped.

"It's heart breaking because we expected to win this game," he said. "I think it was probably due to the fitness levels of our boys and lack of preparation."

As Group A winners, Tahiti will now go on to meet Solomon Islands at 11am local time while Group B winners New Zealand will face New Caledonia at 3pm local time in Friday's semi-finals.